HIDWOODS is an addon that completely turns the Minecraft's Overworld into a whole new dimension.

Explore custom biomes and structures, discover the creatures of this world, build your base using the large choice of new blocks and furnitures, collect new resources to craft powerful machines! 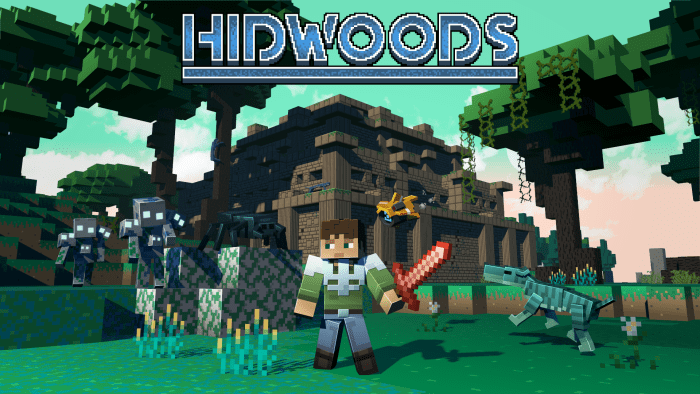 Hidwoods is an addon for Minecraft bedrock made by tomaxed44. This addon completely turns the overworld into a whole new dimension, including custom biomes, mobs, complex machines,  blocks, items, and other features.
In this new environment mostly, you will spawn near a landing pod and will find various different hostile and peaceful creatures scattered on different biomes.
Please note that this project was started as a test addon where I learned how to make entities behaviors, models, animations, etc, this means some of the features don't have a real utility.

the world generation is composed of 3 new biomes,
The world generation is composed of new biomes:
-The hidwoods forest (originally named Hidwoods), mostly composed of Cepry trees, a big tree type with blue leaves. This is the most common biome. Big sand areas are commonly found around this biome.
-The Derosa forest, composed of Derosa trees. This biome is slightly rare.
-The Hodren lands, a biome composed of hodren grass and dried mud.
-The myrica forest, a biome usually found near plains or forests. This biome is made of mud and water. Myrica trees can be found here.
-The plains, very similar to the vanilla biome.
-The desert spikes, Composed of sand, dried mud, and terracotta. Plains made of sand and grass are often generated nearby.
Vanilla biomes are disabled. 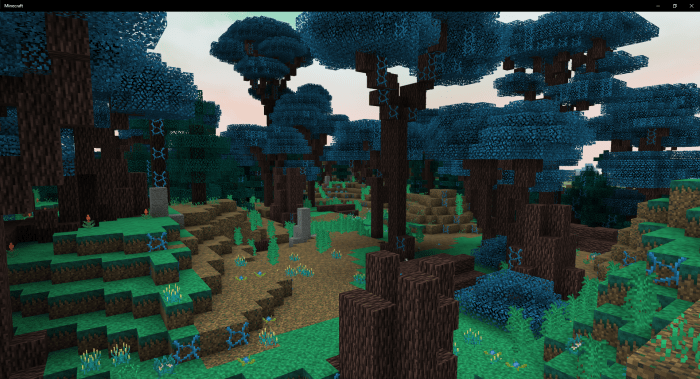 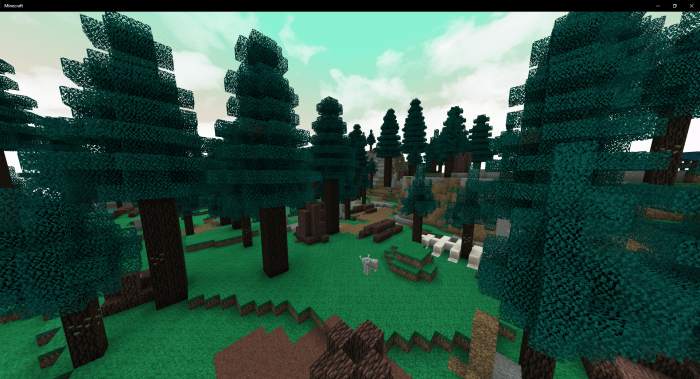 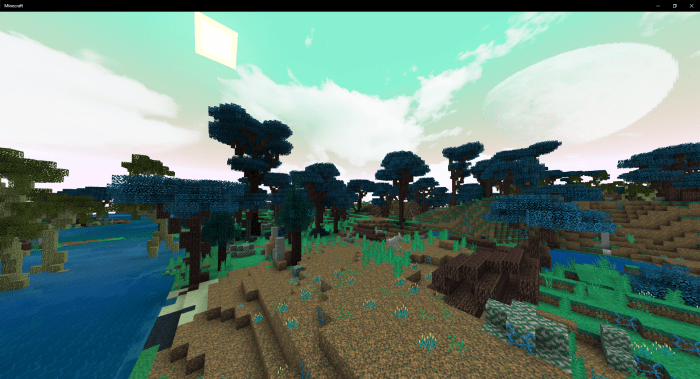 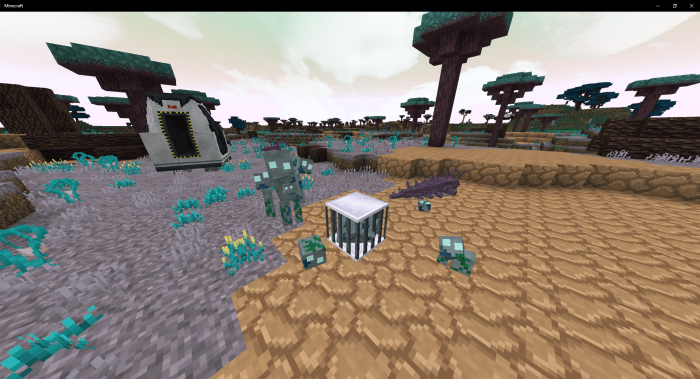 The majority of the entities are earth creatures that can be found on the surface at day or night.
Vanilla entities natural spawn is disabled, although they can be found on villages or mob spawners.

Here are some of them: 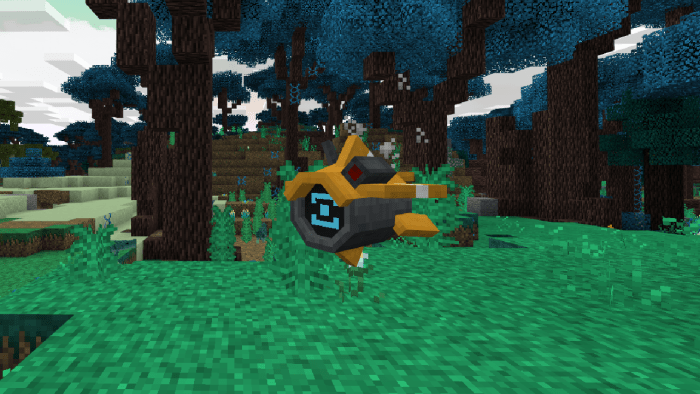 Phy, also called Phy the bot or Phybot is a small flying robot that can be tamed by the player using Batteries. When tamed, this small robot follows and helps the player in combats. 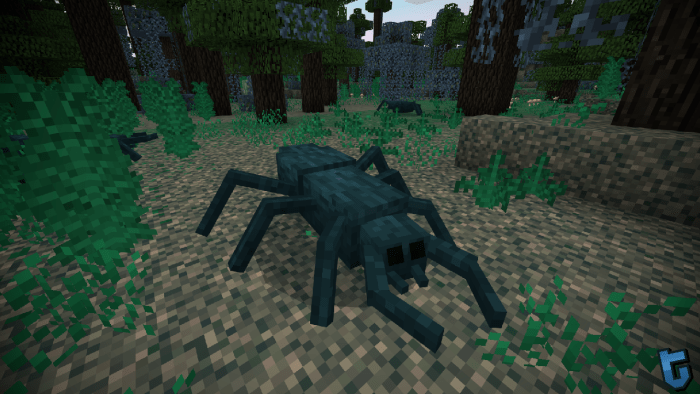 This entity is found everywhere on the surface, be careful! 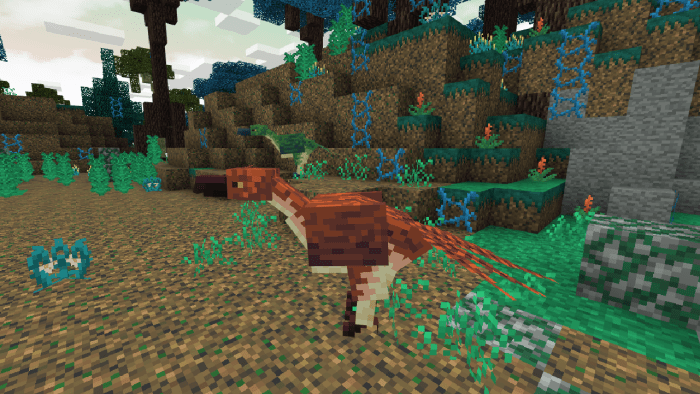 Rideable entity that can fly and glide. Doko's Eggs can be found on big derosa trees 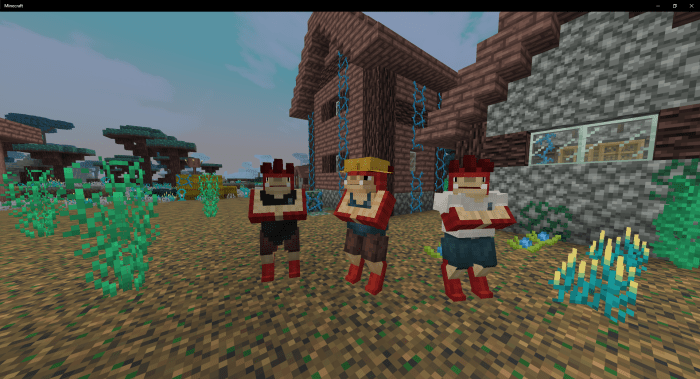 Villagers entities found in villages. They have custom trades. 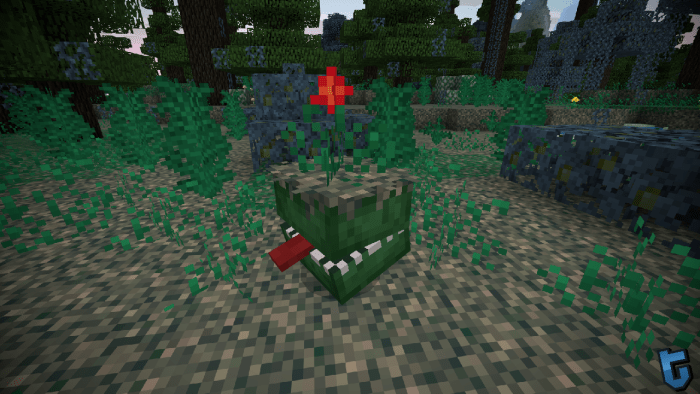 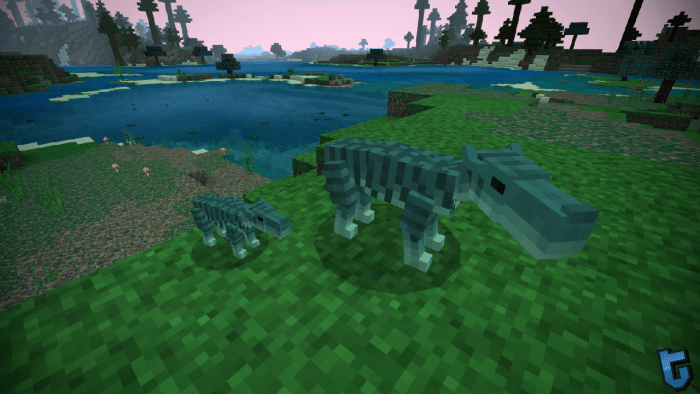 This mob can be tamed by the player. 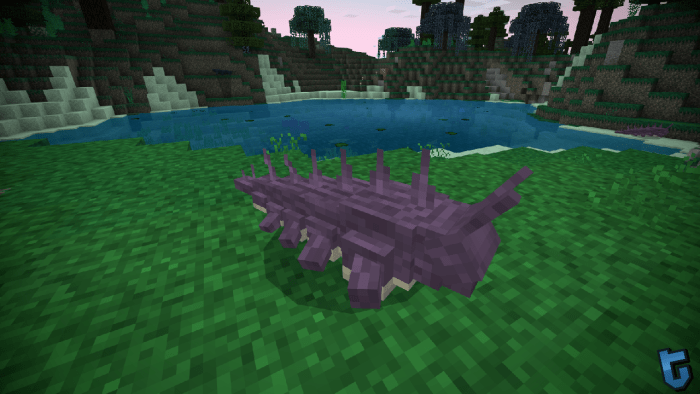 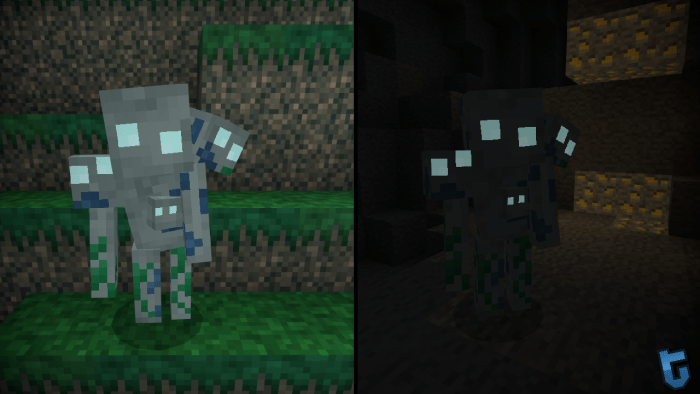 The most common form of Midlin is the humanoid form seen in the picture, however, small and tiny Midlins exists. another version of the Midlin is the Midorock Boss. 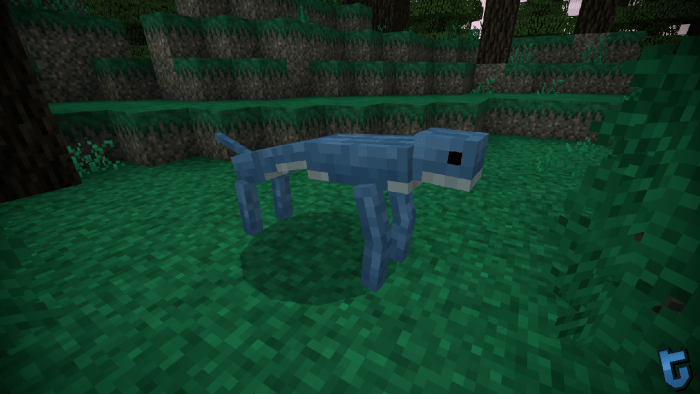 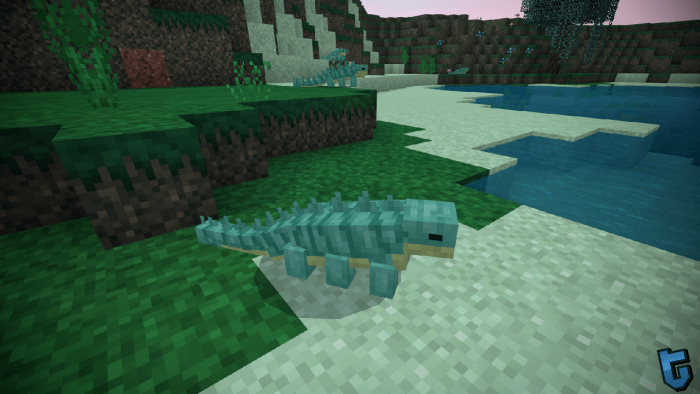 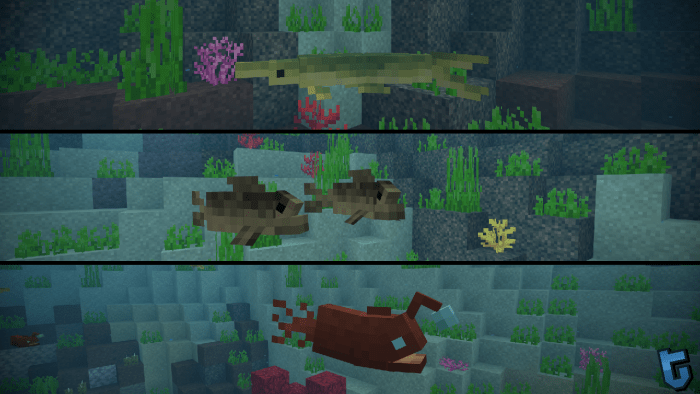 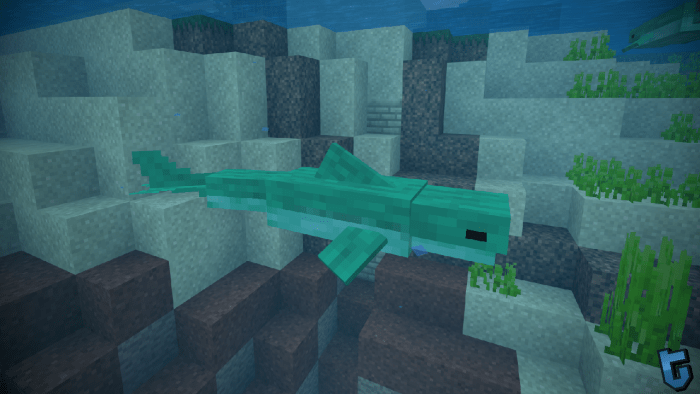 There are more than 100 new blocks added, a lot of them are decorative.
This addon adds many new items, like food, ores, swords, and more.

Blocks and items are still experimental gameplay features and will likely change, so I won't describe each block and items of the addon here. (for now)

There is an in-game guide available at any time describing all entities, crafts, and important gameplay features. 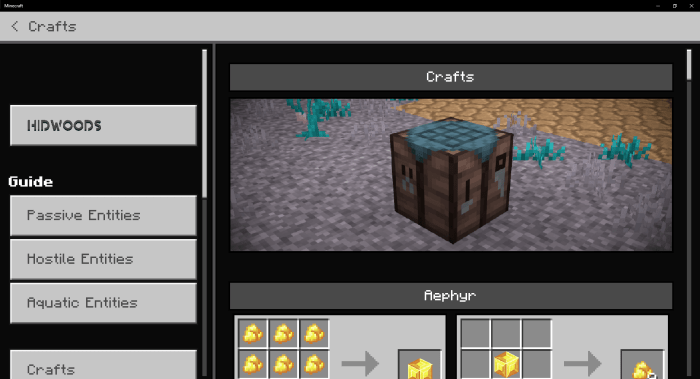 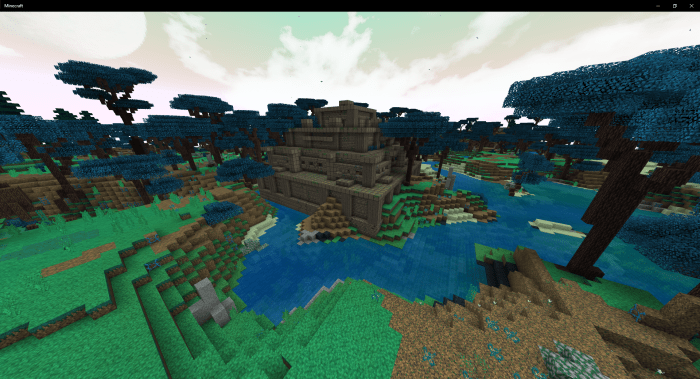 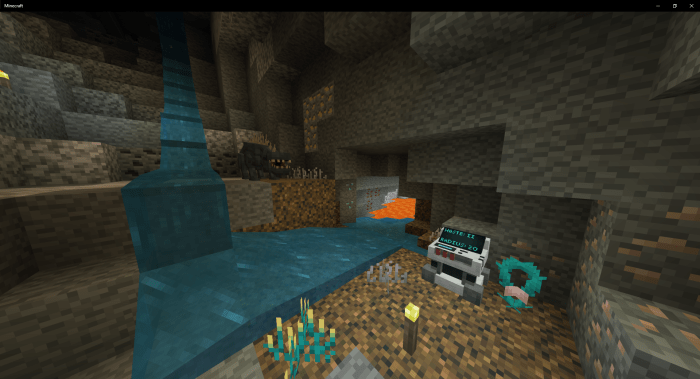 The caves are full of resources an danger 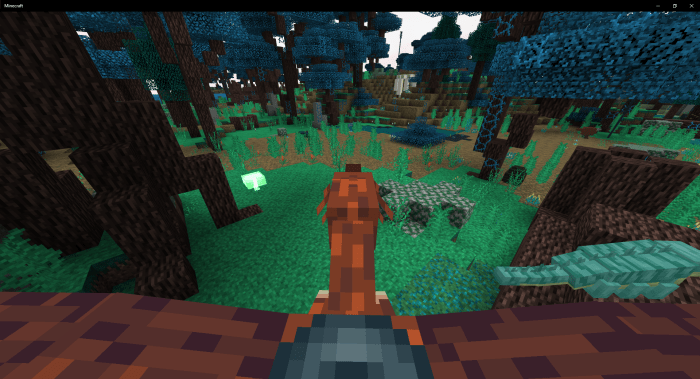 Riding a Doko, it's a big bird! 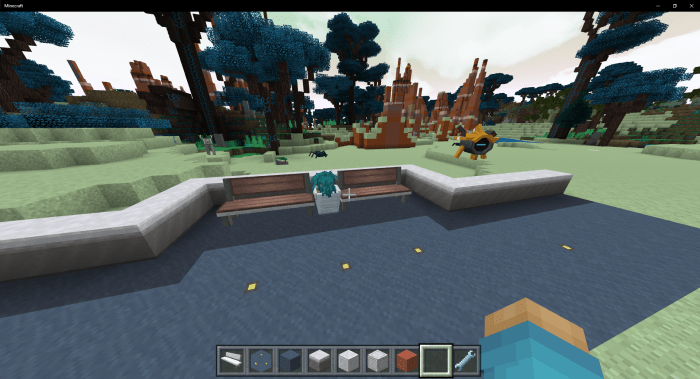 Some furniture, and decorative blocks. 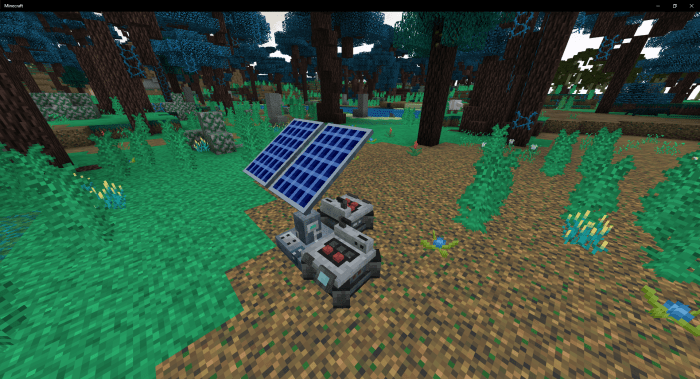 -New type of furniture: the desk and chair.

-All furnitures now has new shapes and additional textures. (use a wrench!)

-Furnitures can now be moved and rotated using a new item, the Hand Truck

Use Experimental gameplay ON

The addon isn't working with the 1.16 beta

1
That_Inky_Boi September 23, 2021 at 4:24 pm
This is an amazing mod, maybe you should contact the person who made the betweenlands mod to see if they will allow you to port it.
🧡

1
TheEnderWarrior July 21, 2021 at 6:10 pm
This mod is great but there’s one problem. Whenever I make a world with this mod the sky always comes out glitched.
🧡

1
Ezzzz June 28, 2021 at 2:45 am
I was playing this pack regularly but i loaded up a old world from 1.16 in the new 1.17 and it’s just nothing I can only see the mobs and when I go into global resources it say there’s one warning iam not sure what that means but plz 🥺update this pack to 1.17 supported
🧡