Recently, I have been seeing a lack of accurate shark addons for Minecraft. so I decided to do sharks some justice, and make an accurate addon for them. Each shark has different behaviours, social lives, and habitats, and I hope I have achieved this in Shark Biology.

There are currently 14 sharks in the project. Allow me to give them a quick introduction.

GREAT WHITE SHARK
A popular favourite among pop-culture, Movies, Games, TV, and our imaginations, the Great white shark is the apex predator of temperate and cold oceans across the globe. It is presumed to have the strongest bite of any animal alive, and can grow up to 6 blocks long.
STATS:
Neutral Towards Player
24 HP
??? attack damage
6 blocks long
Drops: Surprise! 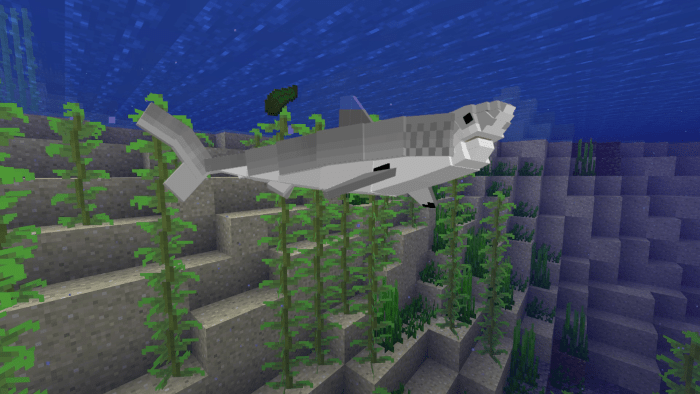 BLACKTIP REEF SHARK
Found in tropical reefs and sand beds, the Blacktip reef shark is another favourite, as it is often displayed in public aquaria, and sometimes in private collections as well, and tourists often see these sharks, as they are abundant near popular tourist attractions. Nobody Knows what the black bits on their fins are for, but it's assumed it's to attract mates.
STATS:
Passive Towards Player
20 HP
??? attack damage
3 blocks long
drops: ???

SMALLSPOTTED CATSHARK
A small, cute looking, common shark, found across Europe and the UK. It may surprise you to see a shark that looks like a catfish, but that's because many people hear more about large sharks in media and news. It is very inactive, and lays on the seabed, waiting for night. it is also ideal to keep in your Minecraft house, if you can build a large enough tank for it.
STATS:
Passive Towards Player
10 HP
No attack damage
1.5 blocks long
drops ???

TIGER SHARK
A tropical shark, this shark will feast on anything that comes by (apart from players, unless you hit them). it is very large, strong, and can knock you out in a single blow. Believe it or not, the best place to see them is in the Bahamas!
STATS
Neutral Towards Player
20 HP
??? attack damage
5 blocks long
drops leather and beef. 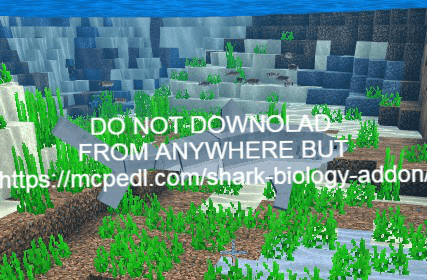 BIGEYE THRESHER SHARK
This shark has a tail lobe that's longer than the rest of it! The thresher shark uses it to stun shoals of fish, and then using its small mouth to gobble them up. It is globally, from the UK to the tropics, and feasts on small fishes.
STATS
Neutral Towards Player
20 HP
??? attack damage
drops ??? 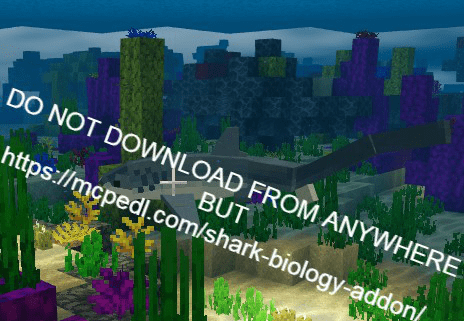 HAMMERHEADS
There are two species of hammerhead sharks in the project. The first one is the Bonnethead, a small costal shark the is the only true omnivorous shark. The second is the Great Hammerhead. Living in the tropics, it loves to eat rays!
Both are Neutral 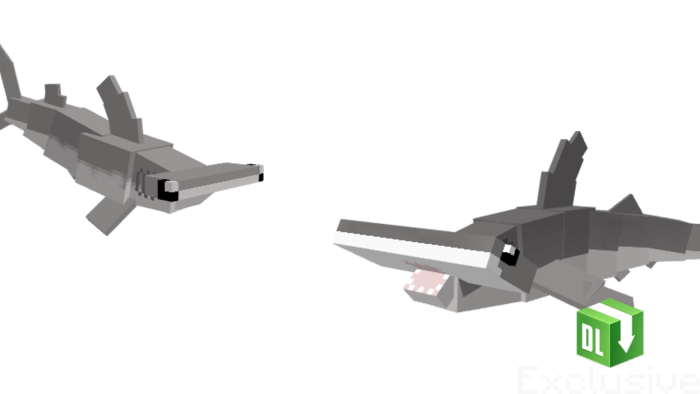 No Limits Sharks
There are 6 No Limits sharks in the project. Shortfin Mako, Longfin Mako, Smallspotted Catshark, Tope, Blue, and Smoothound. These sharks are being fished worldwide without any limits, and are in serious decline. Go to https://nolimitsnofuture.org/ For more information on the real life issues these sharks face, and to find out ways to support their future. If you could donate or sign the petition, I would really appreciate it. This charity is totally non-profit, and I'm sure they would love your support. 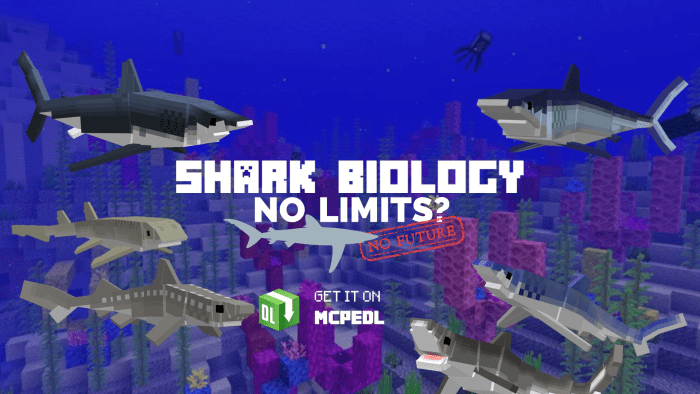 BONUS SHARKS
There are two secret mobs in game for you two discover. they have been suggested frequently, so have fun discovering and searching!


That's all the sharks currently in-game.
I hope that you enjoy playing the addon, and if you have any questions or suggestions (no, no megalodon) put it in the comments, or DM me via Discord at Diddy Konk#4181.

NOTE: DO NOT POST THIS ADDON ON ANY OTHER ADDON WEBSITES. YOUTUBERS, IF YOU WANT TO REVIEW THIS ADDON, DM ME AT Diddy Konk#4181 ON DISCORD, OR EMAIL ME AT [email protected] ALSO, CREDIT ME AND SCRATCHY IN THE DESCRIPTION, AND PUT THE MCPEDL LINK IN THE DESCRIPTION.

In case you have discord, and wanna follow our progress, and chat about sharks: https://discord.gg/sDP24AY8Qf

Thanks for looking at our project!

NOTE: The Longfin Mako has a few bugs. We are fixing this.

NOTE: This project is compatible with RTX. It really enhances it and I recommend you give it a shot if you are playing on a high-end pc. 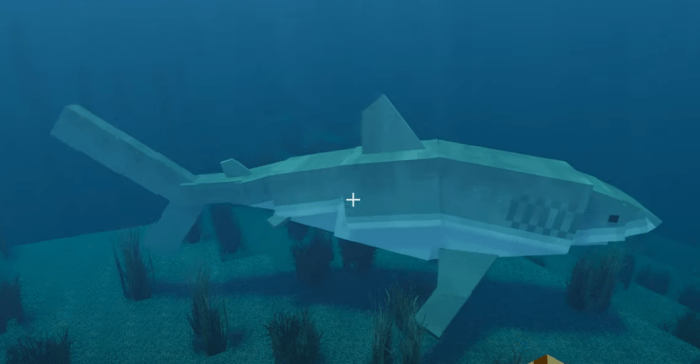 Click on the link and it will send you right there. No shorteners or ads.

January 10, 2022 at 11:37 pm
i think you forgot about a few shark no im not asking for megalodon
im asking for goblin shark , basking shark , greenland shark, whale shark , and my favorite is frilled shark plss make the frilled shark.
Edit | Reply
🧡

December 31, 2021 at 9:46 am
Hi everyone, I lost the password to my main account because i have the brain of a goldfish. But a few things:
A: Update coming in a week or so
B. Variants are coming
C: A few new surprise sharks!
Look out for the New Depths Update soon!

December 31, 2021 at 9:50 am
Oh, and if you want proof if you are suspicious (Always be aware online), message me on discord, link in the addon description. I will confirm it is me. just ask me if it is me, so it stands out from my other dms.
Edit | Reply
🧡

September 16, 2021 at 2:18 pm
might be good but megolodons cause mad lag so i cant really play it without constantly /killing them
Edit | Reply
🧡

December 31, 2021 at 9:52 am
In the upcoming update, megalodons will be command only. Thanks for bringing up the issue!
Edit | Reply
🧡

July 15, 2021 at 8:43 pm
can you fix some spawn egg names the tope and longfin mako names are kinda weird just a suggestion but can you add a hunger bar for the sharks? also can you make it that cat shark are bucketable alongside the shark pups and add new sharks like lemon shark frilled shark and also add a manta ray if not that is fine probably add nurse shark and zebra sharks also add leopard sharks i would love that
Edit | Reply
🧡

December 31, 2021 at 9:54 am
In what way? Animations? Behaviour? Visual glitches like missing textures?
If you are playing with several addons, disable them. one other addon is fine as long as it does not feature tigers, as the identifier gets mixed. Thanks for the feedback!
Edit | Reply
🧡

May 01, 2021 at 1:28 am
How do I download this on IPad it says not a valid zip code and it also say unknown pack name, unknown pack description and unknown pack version
Edit | Reply
🧡

April 15, 2021 at 6:06 pm
This is amazing, it would be awsome if you could add some types of new fish into the game, ive seen a lack of "fishing addons", i think you could make a really cool one, and if you need any help with making the art/sprites for the new fish i am more than happy to help, if you wish to contact me and see my work add me in discord: SuperSonic#4692
Edit | Reply
🧡

December 31, 2021 at 9:59 am
We were considering this Idea, but I can say that we are working in part with Aquaticraft to bring accurate marine life other than sharks. I am a developer in this, so check it out for fishing and marine stuff.
Edit | Reply
🧡
Report Comment
Login Sign Up Submission