Nowadays, when people say or hear the name "Ferrari", they are most likely to think of a "supercar" company or to certain people, a "premium" car brand, a car brand for the rich. If you knew more about cars, then you'd probably think of the cars made by them such as the modern 458 or a 488. But if you are one who enjoys retro sports cars or the "wedge-like car design" of the 70's-80's , then the 308 is most likely to be one of the cars you'd think of.

Not only does it have a timeless design, it is also capable of a top speed of up to 255kmh or 158mph which at first glance may be quite slow, but keep in mind, this car was made during a time where emission regulations were starting to tighten up so under those circumstances, it was quite fast.

"The Ferrari 308 GTB berlinetta and targa topped 308 GTS are V8 mid-engined, two-seater sports cars manufactured by the Italian company Ferrari from 1975 to 1985. The 308 replaced the Dino 246 GT and GTS in 1975 and was updated as the 328 GTB/GTS in 1985. The similar 208 GTB and GTS were equipped with a smaller initially naturally aspirated, later turbocharged two-litre engine, and sold mostly in Italy. The Pininfarina-styled [...]" -Wikipedia

Has mid-high speed, 2 seats, a container slot meant to be a container or a glovebox, animations and sounds.

Has 2 variants and a total of 5 colors. 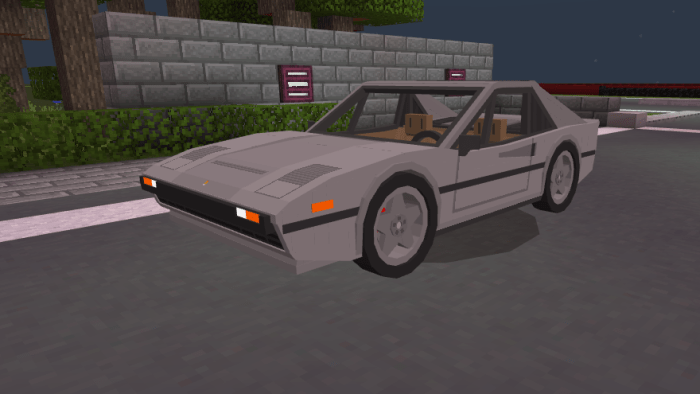 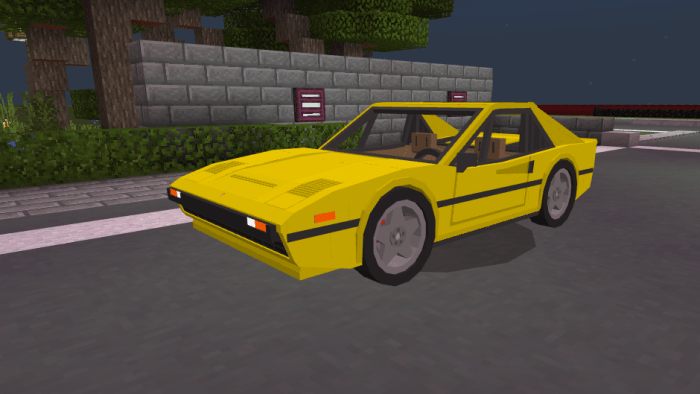 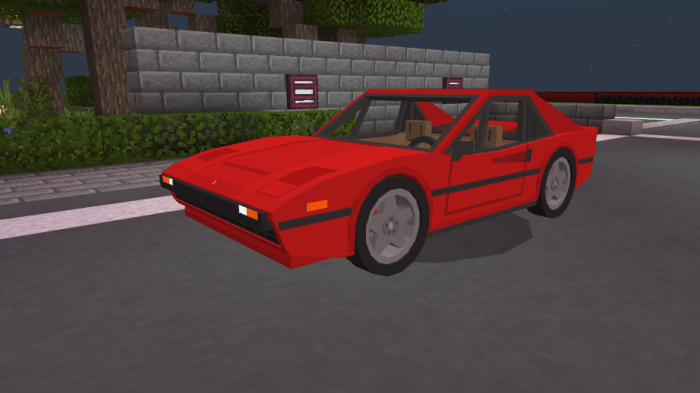 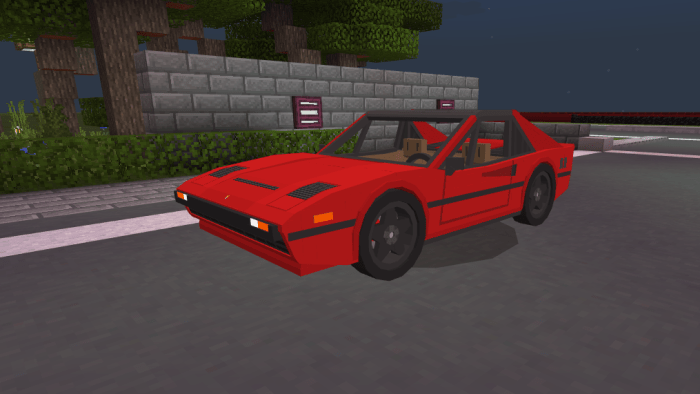 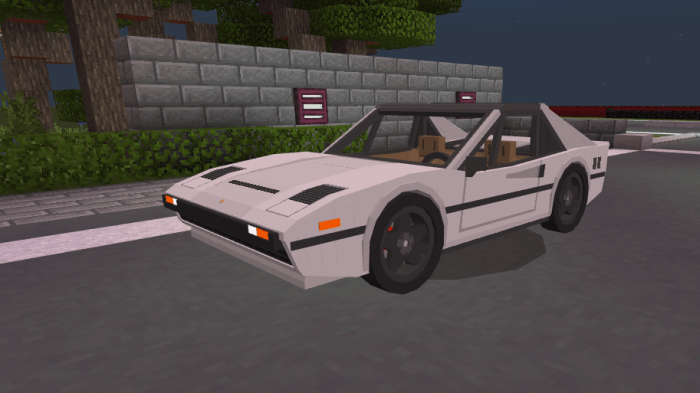 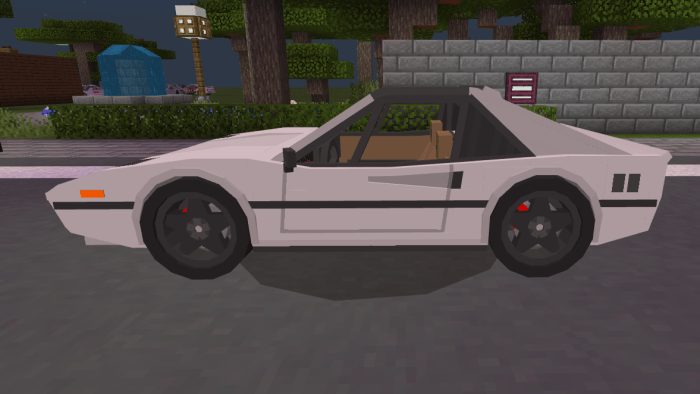 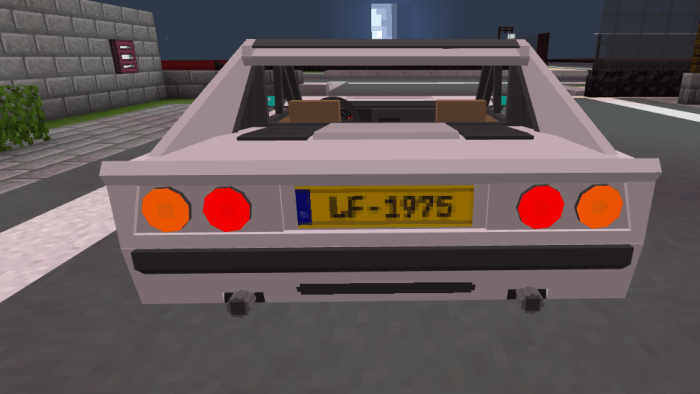 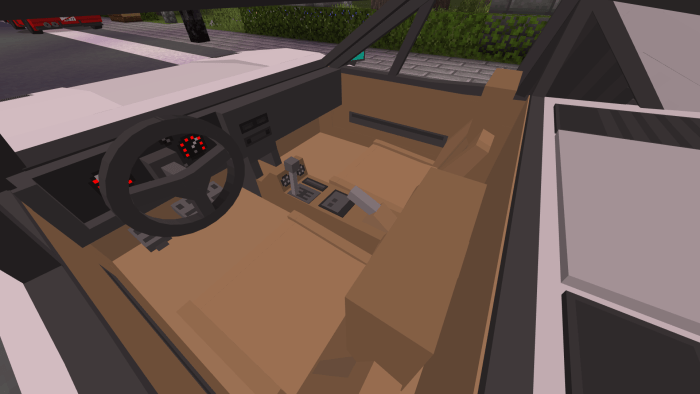 Method 1: Get their spawn eggs from the Creative Inventory. They are classified as spawn eggs.

March 13, 2021 at 9:37 am
Hello. You got some really nice cars you've made. What program do you use to create the models, and is it hard? I want to create a Volvo since no one else does it and my friend wants it so bad. I'm really new to this and it would help a lot answering
Edit | Reply
🧡

March 11, 2021 at 12:57 am
Really good honestly, proves that Ferrari isn’t always a “premium supercar” brand. I have a request, I already asked this but can you try to reboot the older models (ig. RX7 FD, 15’ Camaro, etc.) and when do you think the European and American Car Pack (as well as JDM Legacy Season 2) is going to be released or what is your estimation.
Edit | Reply
🧡

March 08, 2021 at 5:48 pm
Love all your mods, just want to ask if you're ever going to make some European cars such as a VW Golf, Ford focus,Renault Clio. Or just more street cars such as a Toyota Corolla. This would be epic, 5 starts, keep up the great work!
Edit | Reply
🧡

March 06, 2021 at 10:03 am
great stuff as always, keep it up. Also after your well deserved break, how bout a rolls royce of some sort? It's quite blocky which makes it fit in minecraft. Also it's european. Most addons are just supercars or exotics so it'll be good to have a good ol' british brick with wheels.
Edit | Reply
🧡

March 06, 2021 at 8:55 pm
Hey bro, ig I could make a Rolls Royce as that'll be something cool to work on (interior and it's detail and all that jazz). I'll see what I can do!
Edit | Reply
🧡
Report Comment
Login Sign Up Submission