This is a simplistic D-Day map that can be played with your friends. It consists of two teams, the Americans and the Germans. Once you join the game, you'll be able too pick which team you join. The Americans spawn on a ship off shore, and the Germans spawn on the Mainland on the cliffs. It can handle around 16 Players without much lag (Tested on Xbox). 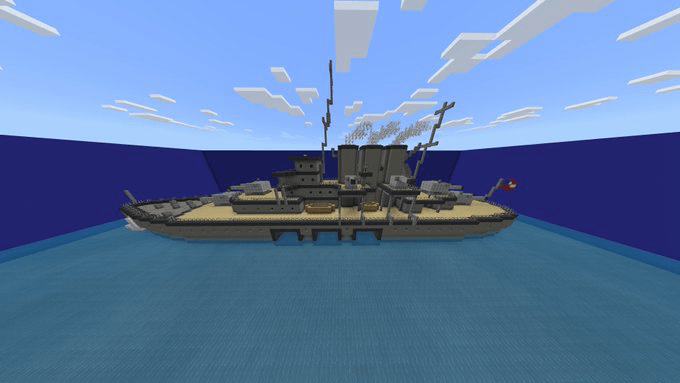 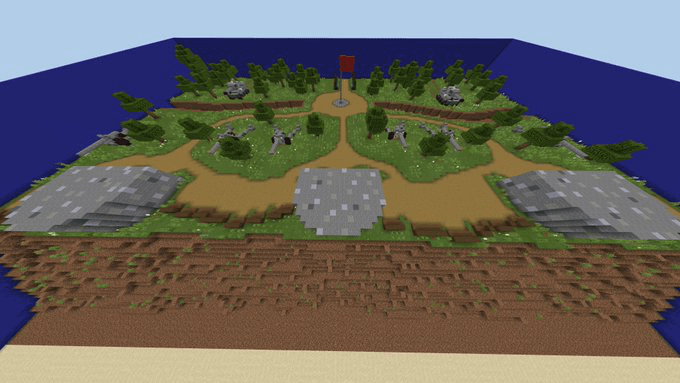 Each team has a shop in their spawnpoint. The currency is XP. Everytime someone on the opposing team dies, your team will all receive 1 XP. The shops on each team consist of extra weapons, meds, and ammunition. The American team have exclusive access to a Shovel which can be purchased at the shops. You spawn with a worse, default shovel. The German shops has access to an Airstrike. This is a snowball, and when thrown onto the beach, it will call in a TNT Airstrike on the location that the snowball lands.

Extra Information
==========
- Germans can not go onto the Beach, it will kill them. This stops them from camping the shoreline.
- You can change team in the Respawn Room.
- The beach will reset every 10 minutes, removing any damage caused.
- Boats will automatically be destroyed when landing on the beach.
- Their are Random TNT sounds in the background.

August 10, 2020 at 3:11 am
Uhmmm. Hello co2by well....i appreciate your creation.....and i hope that u keep the negative comments as an inspiration to make better maps. I didnt mean that your d-day map was bad but to inspired you make better maps..
I also saw your effort on making it... And do you make addons?
I'll see your reply soon...thnx

August 11, 2020 at 1:39 pm
Hey, I dont make addons as I dont know how too. I run realms and worlds for xbox players at the moment, Minigame and Military ones. This map isnt amazing and I could do better, but it was an old map that I thought id decide to upload.
Edit | Reply
🧡

July 13, 2020 at 7:26 am
If the command blocks for the shop and tp aren’t working get rid of the r=4 and m=a, that worked for me. Try changing the boat kill to ~ ~-2 ~(the previous worked fine but this way it usually breaks like a block away from the beach). Also sound boom might need to be fixed(get rid of r=4 m=a for this too). You might need to rewrite the boat kill command in order for it to start working. Map looks great(especially with ESBE 2G!) If you don’t have many people playing if definitely recommend changing the prices or using /xp. It’s a great map lots of time and effort clearly went into it! I’d recommend flying around beforehand and adding some little things like barbed wire and speed potions for the initial charge on the beach, and other little things you think of to make it more fun for you and the people your playing with. The map has enough on its own to have a fun game but it’s also got a lot of potential for creativity, super fun thinking of cool ideas to add to it and figuring out how to add them! Thanks a lot for making the map, 10/10!
Edit | Reply
🧡

July 09, 2020 at 9:06 am
U should really credit the creator in roblox since its an exact copy of the roblox game called d-day
Edit | Reply
🧡

July 09, 2020 at 11:03 am
This is unrelated too that game. The only thing I could see that are similar is the American Spawn point. Apart from that, the Roblox D-Day is quite a different game, and I did not base any of the building of it.
Edit | Reply
🧡

July 08, 2020 at 3:58 pm
I'm am pretty sure the download link is a virus, I have tried going to the download link but it keeps sending me to a virus website (i checked, it was definitely a virus.)
Edit | Reply
🧡

July 09, 2020 at 6:24 am
Sorry man, if youve just used this map and changed it slightly I dont want you too post it. You should make your own D-Day map from scratch.
Edit | Reply
🧡