With the geometry shader files originally used for rendering in VR, this shader duplicates the cloud layer to give more depth to the sky. The sharp blocky shading on the clouds is also softened, and made slightly more transparent. Because this shader only modifies the clouds, it can be used on top of other shaders. 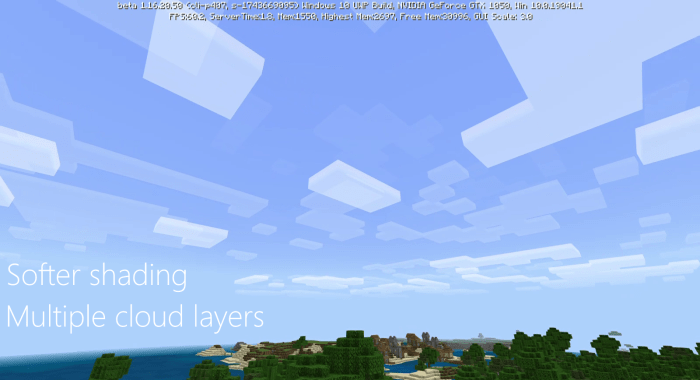 Why can't this work on Android/IOS?

The geometry shader files that are needed are only present for the win10 edition of bedrock, since the android/ios versions of the game use a different shader language that does not use geometry shaders.

Thanks to PHO for sharing some of the techniques used for weather and time detection, and Matt for sharing the possibilities with the geometry shader:

Thanks to gengHAr15, Mcbe_Eringi, and Eldeston for letting me use their shaders to showcase compatibility:

This is just a small update that fixes the bug where this shader would cause minecraft to use the old pigman model and texture. This will be the final update to this pack, since the new render engine is expected to make all shaders incompatible very soon.

Enjoy it while you can!
- xanion

THIS SHADER WILL ONLY WORK ON WINDOWS 10!

Though apparently it also works on windows phones. It is not compatible with the beta, since it uses the new render engine.

Make sure that clouds and fancy graphics are enabled in the video settings, and that there are no other shaders/texture packs that disable the vanilla clouds on top of this pack.

April 08, 2021 at 9:11 pm
Why I can't use this super duped clouds? I use official minecraft on windows 10 and follow all the instalation guides.
Log in to Reply

December 21, 2020 at 6:41 am
Maybe you can make a fake super duped clouds? Like a top skybox with the clouds texture that moves? It won't be easy but for you it probably won't be hard either! I want this on mobile so bad and I don't mind is a cubemap
Log in to Reply

December 13, 2020 at 8:24 am
I know this is only for windows 10, i really want it to be in android (i have read the description and geometry shader dont work in phones). But i recommend search in google how to have geometry shader in android. Thanks
Log in to Reply

November 01, 2020 at 8:29 pm
No, sadly it doesn't. All the betas (especially the RTX one) use the new render engine, which is not compatible with shader packs.
Log in to Reply

August 20, 2020 at 12:30 am
perhaps using root permission,you can paste the geometry files in the minecraft system app folder in order to make it work on android
Log in to Reply

July 28, 2020 at 11:46 pm
Hi... Liked you shader but im on android so I cannot play with it but idk if It's okay to you because I'm gonna comment to hyrazero's vid if he can recreate it for mobile but after I do that is there like a document file and I'm gonna check it. Thanks!
Log in to Reply

July 06, 2020 at 8:32 pm
Will you ever be able o make this shader like the super duper graphics pack Because some people dont have a RTX card If you can i think you should wait until the renderdragon
Log in to Reply
Report Comment
Follow:
Login Sign Up Submission
Tweets by MCPEDL
Tweets by MCPEDL