Demogorgon is a monster from the popular TV show called “Stranger Things”. It’s immensely powerful.. Targeting and attacking a Demogorgon is extremely tricky as if you attack one then all of them in your surroundings will focus on you. They have some crazy animations as well! 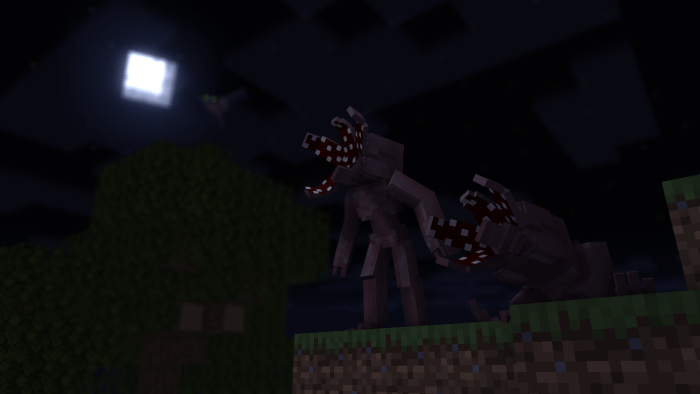 Demogorgon and Dartagnan will spawn at night time or in caves and will also spawn and live in the Nether.

When it spots a target it will sneak up. Once it gets close to it's target, It will do a jumpscare roar and attack! When there is no targets around after the other target, for about 3-4 seconds, it will heal itself! Once killing the demogorgon, it will drop Slug Item! 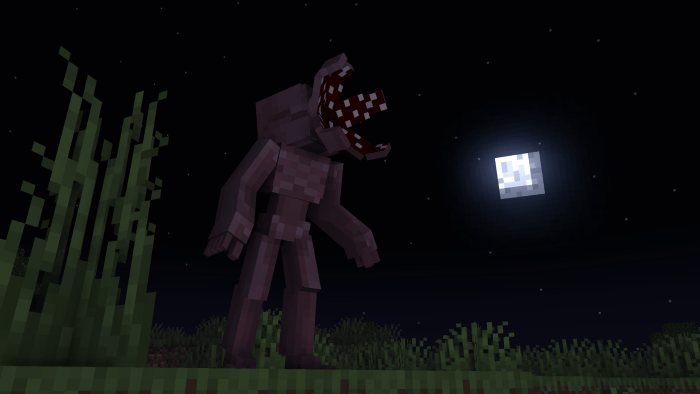 It is similar to a Demogorgon, but It has types of stages, and wild dartagnans will be afraid of Iron Golems

A small worm that is harmless to players but will attack only one mob, which is a chicken, and will eat any food that is on the ground except fish, Yet also tameable with meat except fish.

Familiar to a frog but attacks chickens and rabbits, and will eat any food that is on the ground except fish, Yet it is harmless to players, a bit faster than The Pollywog, and tameable too. 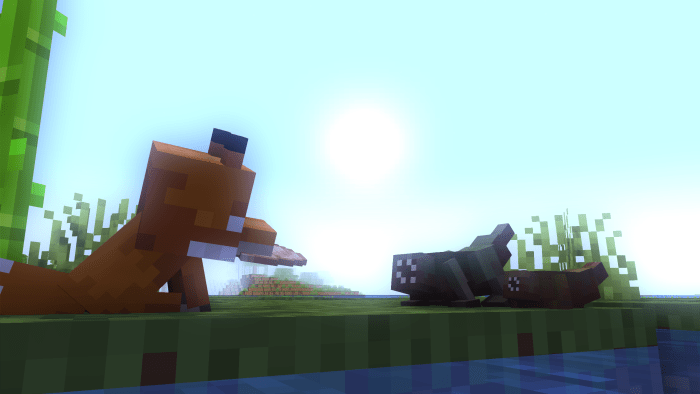 A size of an cat and not harmless to players at all. It attacks any animal on ground and some mobs, and also are tameable but will be hard to tame. When it sees a target from far distance, it will jump and attack the target, which is similar to Fox's attack. 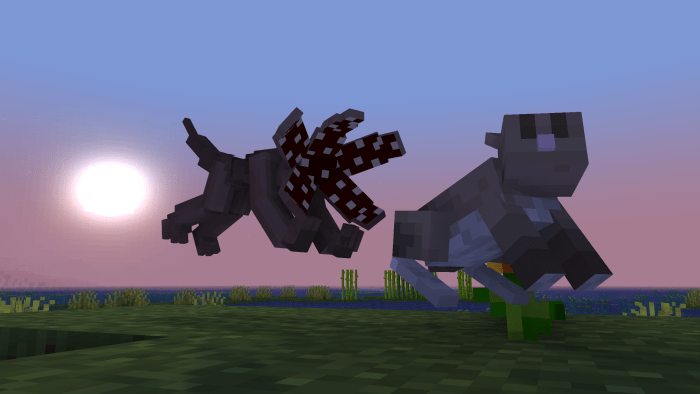 A size of a wolf but stronger, faster then The Catogorgon, and not tameable. It will attack any animals and more mobs, but will not attack mobs in water. When it sees a target from far distance, it will jump and attack the target, which is similar to Fox's attack. but stronger.

Differences between Wild and Tamed:

If its Wild, Demodog will have the final stage which will eventually form into a Demogorgon showing particle effects, but it will take some time to form.

As for Tamed, Demodog will not be able to have the final stage form into demogorgon, instead it will be able to be breedable. 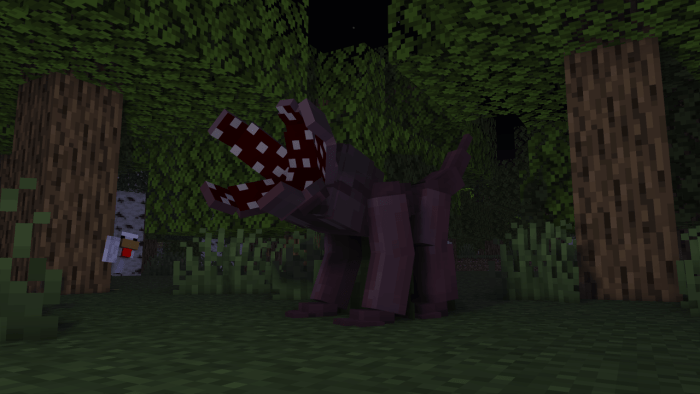 An weird slimy item that is dropped from demogorgon and dartagnan. Once it is spawned, it won't be able move and it is very weak. Leaving it for more than a minute will form into the first stage of dartagnan. Trying to remove or killing the slug will not drop the item!!! So becareful using it! 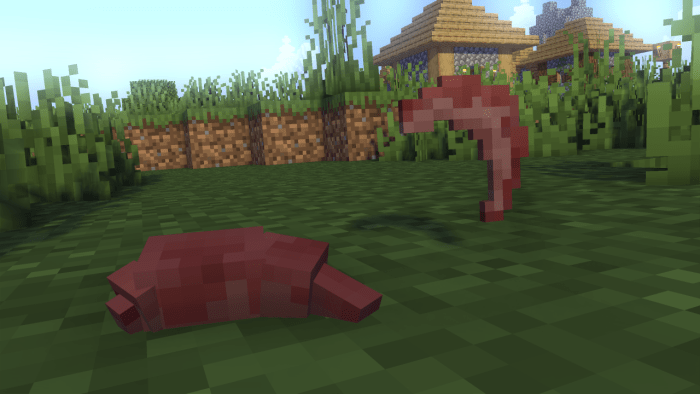 There is a separate resource subpack in the addon to change textures which have Vanilla (Default) and Bare Bones!!!

Special thanks to RobotPantaloons for letting me make demogorgon's bare bones textures for Barebones Texture Pack supporting the Demogorgon Add-On!!! 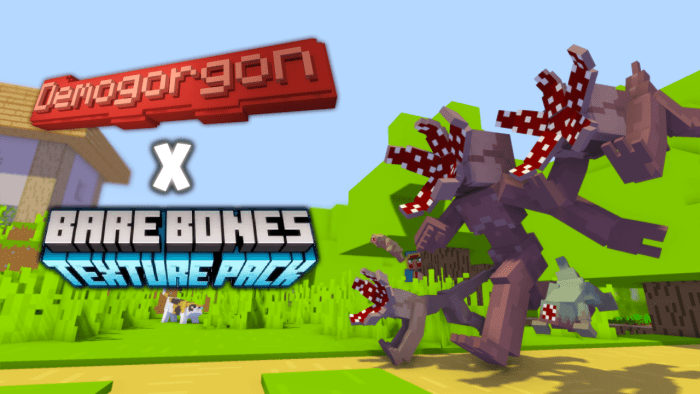 Please, do not use direct links for this addon and any files including the models, and coded files from the demogorgon add-on without my permission!!!!! If so you will be reported about this!!!

Fixed an bug while taming Dartagnans in Minecraft 1.16+ Beta

February 28, 2021 at 12:16 am
could you make a portal addon with the upside down portal as a place able block and add the upside down particles that we can place in our world?
Log in to Reply

December 09, 2020 at 1:03 am
If you are still updating this, would it be possible to make it so demogorgons only spawn near nether ruins? That or another pack that lowers their spawnrate? Getting just 2 of these guys on hard (even easy) is a pain to take care of.
Log in to Reply

November 26, 2020 at 4:57 am
I love this addon but here are a few suggestions :
Pls add the crab like thingy which eats humans and eleven.
Eleven will spawn beside u and it will just follow u and u need to tame her with an enchanted gapple and then she will defend u and the crab like thing will spawn at a village close to spawn. It will head toward u but it will be slow have around 150 up and a special attack which hypnotizes u and u head toward it and eleven will just follow u not kill or anything untill tamed, eleven will spawn a portal which closes and the crab thingy dies(special attack). Pls give their special attack a 40sec cooldown.If u kill the crab thingy all demogorgons die. Please add these and Thank you:)

December 07, 2020 at 12:58 pm
If you read the title it said DEMOGORGON, so it’s only based on the demogorgon and it’s previous evolutions
Log in to Reply

October 20, 2020 at 1:12 pm
hi, great addon still use it today and works fine, you probably won't see this but i just wanted to tell you that im putting your addon in a YouTube series im making, ill leave an unedited link in each video and ill credit you at the beginning, as well ill put a pinned comment with the link and credits with your name, and all the titles will say read Desc. thank you.
Log in to Reply

August 10, 2020 at 12:25 pm
AWFUL! There is NO new creatures except demogorgon, slug and dartagnan. LIAR I HOPE YOU GET BANNED
Log in to Reply

August 10, 2020 at 12:28 pm
Cut the attitude. You have no right to be that insensitive to someone who worked incredibly hard on this addon. Did you turn on experimental gameplay? If no, then do it. If it doesn’t fix it then idk
Log in to Reply

August 19, 2020 at 2:04 am
uhhh what else did you expect from an addon titled demogorgon addon lol
Log in to Reply

July 30, 2020 at 2:54 pm
This message will probably get lost in but I wanted to know if I could use this addon in a video, I'll leave a link to this page and give credits
Log in to Reply

July 03, 2020 at 1:47 pm
Well it’s not all perfect the eating animation is ruined That was my favorite part to
Log in to Reply

July 30, 2020 at 2:43 pm
Ahh yes, A simple bug fix, forgive me for not recognizing you for all of the addons you've made, since you have so much experience in the art of coding, It's as simple as pushing a button, Juju definitely doesn't have any experience with addons and coding, what have they made? Mutant mobs? Pff, clearly I was wrong in believing coding doesn't take work and you clearly know what you are talking about, here's your prize for being so smart ?

September 05, 2020 at 2:49 pm
pls make a separate down load for the resource pack I cant find it no matter how much i try too re download
Log in to Reply

September 05, 2020 at 2:53 pm
wait no behavior sorry please fix the behavior packs
Log in to Reply

June 08, 2020 at 11:52 am
PERFECT!!! The animations, the model and the behavior are all perfect. If you want to tame a cool looking pet or make survival more challenging this is the perfect add-on for you! Just 2 suggestions:
1. It doesn't attack mob from other add-ons because you just listed every vanilla mob in the attack behavior instead of just making it attack everything other than other demogorgons, if you need help with that look at the vanilla vindicator.
2. The hit sound is very loud and annoying, maybe make it less loud.
Those 2 are not really necessary, and even if you don't do them the add-on will still be perfect

June 14, 2020 at 2:58 pm
Heyy can u please help me because I really want the Addon but when I try to install it it says not valid zip. I have this with most Addons and I can’t find how to fix it
Log in to Reply