Explore new underground biomes, find new natural structures, encounter new cave themed creatures. fight a new boss, be spooked by classic cave sounds, and more in the Cave Update Add-on! This add-on adds many very needed additions to caves to make them exciting again. Check back for updates as more will be added in the future!

Thanks to Bridge for making add-on creation faster and easier! If you're looking to make your own addons I would recommend using Bridge!

Version 3 fixes 1.16 compatibility issues as well as adding a plethora of new features. These include 10 new blocks, several new enemies, 2 new underground biomes, new micro-biomes in caves, and more! If you can stand my goblin-ey voice, watch the video above for more details.

*All New desert stone variants can be crafted at the stonecutter.

Video Guide Covering Everything Else

All of these structures will generate in limited quantities. That means that they won't clog up your world by spawning infinitely! So, You don't need to worry about your mines being filled with random structures. You will only find these in unexplored caves. 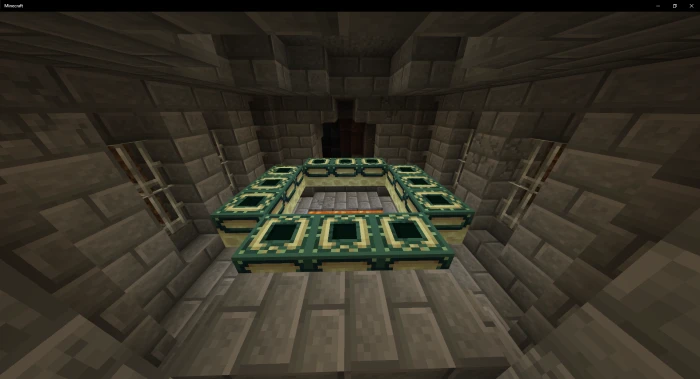 The end portal room is the rares of the structures. It generates about as often as dungeons do. You can rely on finding one of these if the nearest Stronghold is too far away from your house.

This is a spide filled hole found in most caves. Falling in is very dangerous, but does yield substantial loot from all of the spider eggs!.

these portals were abandoned by their creators long ago and have since fallen into disrepair. They are missing most of their obsidian, but can be repaired! 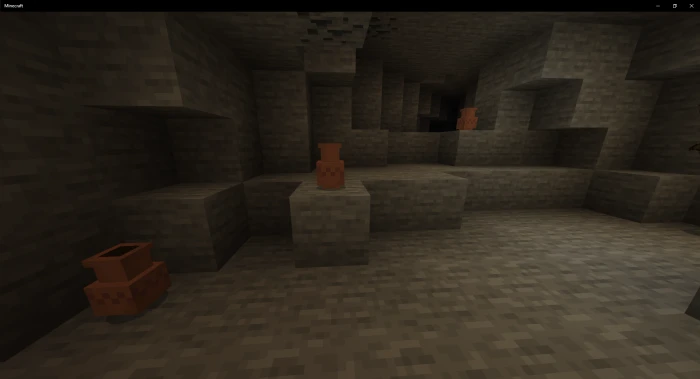 Groups of vases now spawn naturally underground but are in limited supply. They drop comparable loot to spider eggs, however, they can also drop rusty iron keys. These are needed to open the new cave treasure chests. 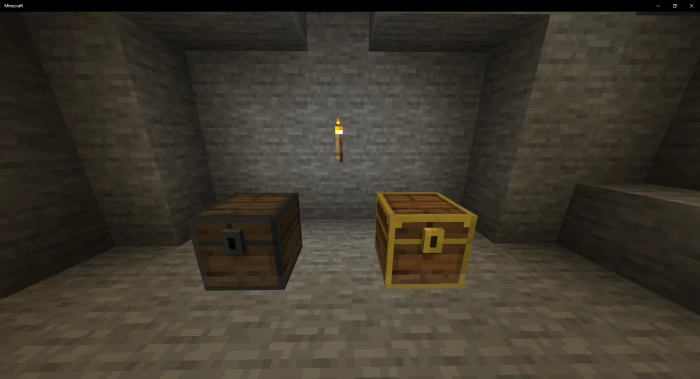 The bone club is found exclusively in the previously mentioned chests. It does comparable damage to a stone sword but has permanent Knockback II. It is also UNBREAKABLE. Use it to send your foes flying away from you!

Not a conventional weapon, the friendly spider nest is a reward gained from defeating the Spider Matriarch Boss. It is a spider egg that continuously spawns friendly green-eyed spiders that will dispatch your enemies. You can recollect the egg by punching it a couple of times and picking it back up as an item. I would imagine this would be fairly useful in raids! 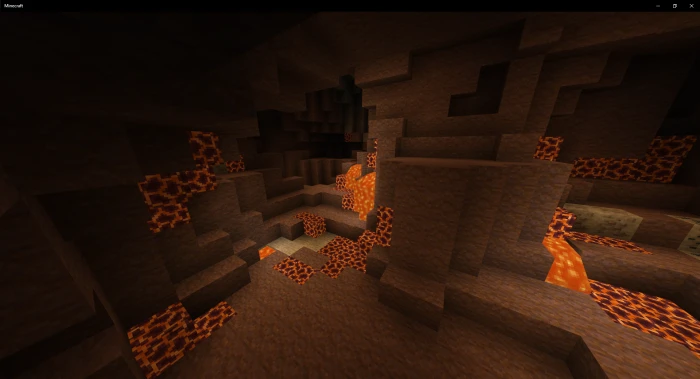 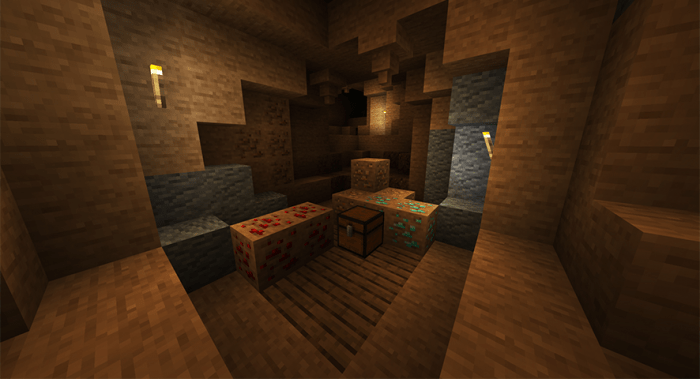 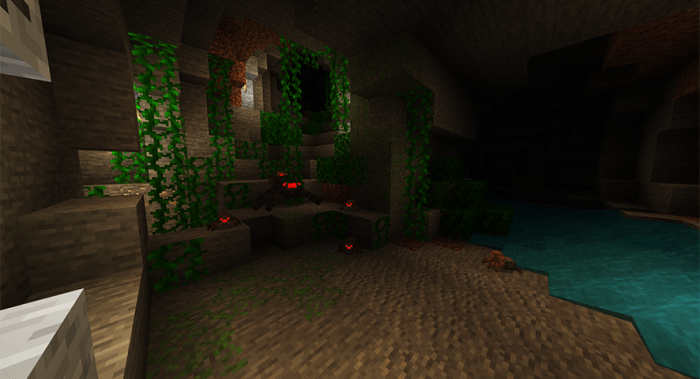 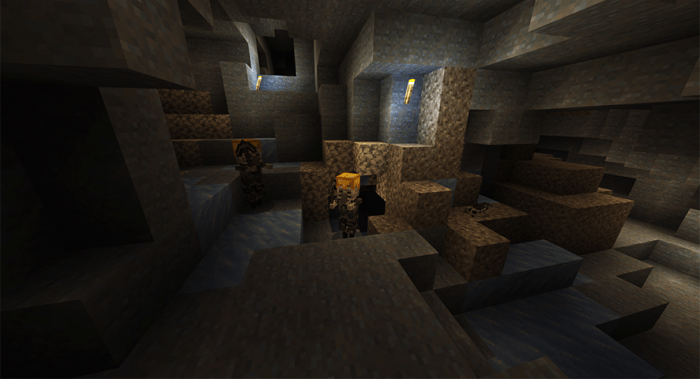 These poor villagers have become trapped and need your help to rescue them! They are found trapped in webs underground and you free them by punching the webs off. They are weak and require food to get the strength to follow you. Once you feed them, they will need to be lead back to the nearest village where they will reward you with XP and become a Miner themed Villager. They use any work stand that other villagers use and trade miner themed items. 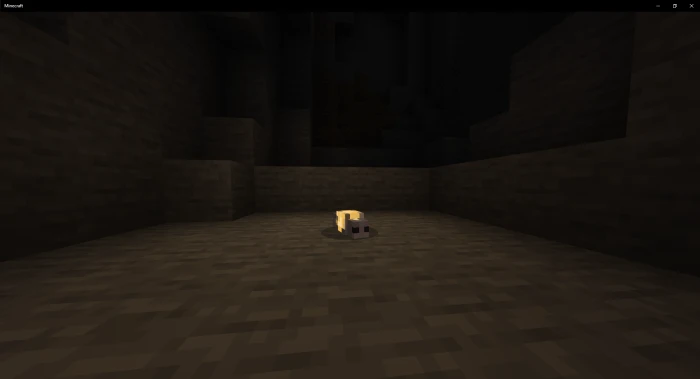 Glow worms are friendly little worms that are found in all overworld caves. Fitting with their name, the glow worms actually glow! They act as dynamic sources of light in caves. You can lure them to specific destinations using brown mushrooms. They drop Glow Goo that when eaten, grants you night vision and it can be crafted into a Goo Lantern using 4 Glow Goos.

These little arthropods are found everywhere underground and drop their respective ore when killed. They run from the player, so you have to be quick! This update adds all of the different ores as crawlers now! You can find coal, iron, gold, lapis, redstone, and diamond crawlers now!

Every time you open a cave treasure chest, you run the risk of being attacked by a mimic. They deal lots of damage and resist knock-back so, early on, your best chance of survival is to run. I plan to add more types of mimics in the future such as barrel mimics and possibly ore mimics, so be on the lookout for future updates!

The undead remains of unlucky villager miners. They are a dangerous foe on account of their pickaxes. Drops bones and rarely ingots. Found underground below Y=40 or in abandoned mineshafts.

Large spiders that carry their brood on their abdomen, waiting to sick hordes of spiderlings your way. They are rare but pose a significant threat to early players when encountered, similar to endermen. Keep your distance when possible. Drops string, spider eyes, and a spider heart used to craft the boss spawn. Found underground everywhere and in higher levels in the jungle.

Spider eggs don't pose a direct threat themselves and in fact, can offer loot when destroyed. However, they also release several spiderlings when broken in addition to their treasure. Spider eggs are found in Spider Nests that generate periodically underground. Treasure consists of cave themed items.

Small baby spiders spawned by Brood Spiders, Spider Eggs, and the Spider Matriarch. While they pose little threat by themselves, they are dangerous in numbers.

A ranged spider that accompanies the Spider Matriarch during the boss battle. It fires a slew of bristles at the player.

More creatures are to be added in Future Updates... 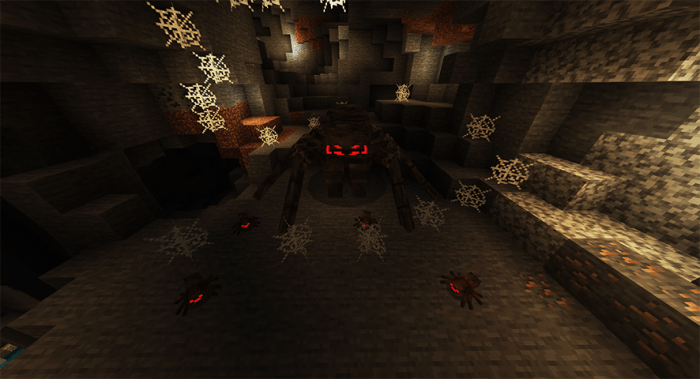 The Matriarch Spider is the largest of the bunch and is not in the best mood when summoned. To summon the Matriarch Spider, one must craft the Matriarch Spider Spawn Block using 4 Spider Hearts and 5 string. Place down the block and break it to gain the spawn egg. The Spider Matriarch has 275 HP and switches between two attack modes depending on how far she is from her target. In ranged mode, she summons reinforcements in the form of spiderlings, brood spiders, and bristle spiders. She will periodically fire bristles at the player in this mode as well. When in Melee mode, she will summon only spider eggs but will also charge the player. A shield, a bow, and at least iron armor and sword are strongly recommended for this fight. The Matriarch Spider drops large amounts of cave related items including a friendly spider egg summoner!

If you have any suggestions on what I should add, let me know!

November 22, 2021 at 5:39 am
its cool but please make brood spider rarely spawn because i was being attack by spiderling coming out of nowhere and there no nearby caves around me how did spiderling get through blocks thats unfair
Log in to Reply

November 15, 2021 at 4:24 pm
I LOVE IT. Such a cool add-on but I am playing on Edu so none of the cave types generate but I have made many a map with the mobs and items as I still have access to those. I would really love if you could try fix it and make it fully compatible with Edu as there are very few that are. Amazing add-on! ^-^
Log in to Reply

October 21, 2021 at 12:53 am
Stop commenting on this addon it will never have a update the last update was more than a year ago
Log in to Reply

September 30, 2021 at 1:51 am
If you ever do more with this addon after 1.18 or create a version with only mobs, an idea I have is making the Brood Spider/motherspider summon a bunch of baby spiders on death. Maybe with query.is_alive since I don't think summoning on death like a slime is a component yet.
Log in to Reply

July 20, 2021 at 9:41 pm
Could you add better loot in the chest? A desert temple has better stuff, and I didn’t find one chest naturally. And the snow stone and desert stone isn’t replacing the stone, but the ores are desert ores. :p
Log in to Reply

June 05, 2021 at 9:15 am
Is this going to get updated since 1.17 is coming out or not cause its a really cool addon the only problem i have that its really laggy.
Log in to Reply

May 31, 2021 at 2:29 pm
really good but again they dont spawn naturall sort it out
please im on education edition btw
Log in to Reply

May 30, 2021 at 3:05 pm
this was one of my favourite mods and i've been using it for almost a year, but what with 1.16.100 i cant help but feel that some things are outdated. eg: the bone club can now be a real weapon, the chests and vases can be proper blocks, and thins like spider nests and other entity's like that would work better as blocks because as of now you can get them to teleport around like shulkers by putting them in certain situations. its been a long time since an update and you were one of the few creator's who didn't just make dumb mods like: "emerald armor addon!" or "cave update addon! (10+ new ores!)" which just copied mincraft's vanilla textures but recoloured it. you seemed to actually make original content and i would love to see more of your work. that's my request.
Log in to Reply

May 17, 2021 at 3:01 pm
I think the spider boss is a little too easy for iron armor I killed it with just iron and a bone club and I also noticed the brood spiders and bristle spiders didn't spawn probably because i stayed close and when she spawned eggs i could kill them with one hit

May 17, 2021 at 2:49 pm
so i found out the when you kill spider boss it will keep doing the death animation over and over until you hit it
Log in to Reply