Have you ever watched asdfmovie? Remember Mine Turtle? These lovely walking bombs say hello to everyone! Even if you don't know who I'm talking about, you'll absolutely love these turtles. But be careful, one step and you'll be wiped out of existence!

This addon adds one little creature - a Mine Turtle.

Mine Turtle is a character from YouTube series asdfmovie. It greets everyone and explodes when someone pushes a button on its shell.

There is a whole song about it: Mine Turtle 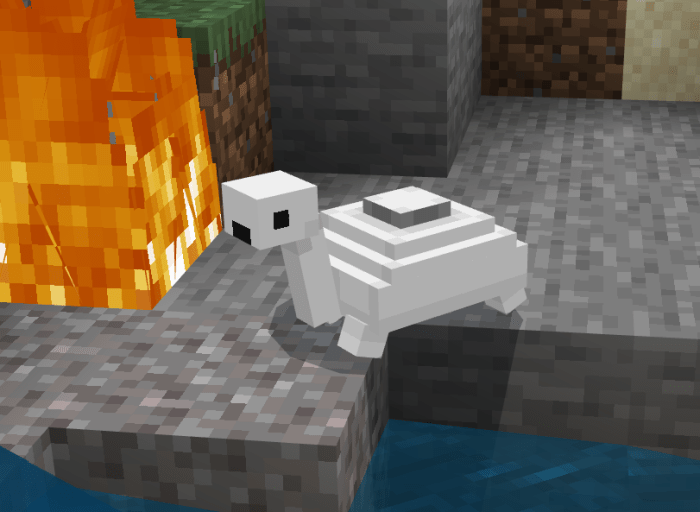 Mine Turtle mob says hello and can explode. It has a button on it's shell and if someone steps on a turtle or hits it, it will explode, like an original one.

It's id is smasdf:mine_turtle and it has a spawn egg:

Mine Turtle has an interesting feature:

If named Dinnerbone  (all mobs with that name get upside down), it will explode when it touches the ground. So, you can make turtle bombs with dropper.

If you use this addon in your media, you must credit me - Sermah.

Renamed file from .mcpack to .mcaddon, otherwise it won't install.

July 23, 2020 at 6:27 pm
great addon. I think you should make the i like trains man or do the flop man or seggersor/dinosaur or the muffin! Love the addon and it i know that you didn't make it (the videos) but I think that they are funny still. Good ? work.
Log in to Reply