Everybody loves UHC! It combines PVP, mining and surviving into one exciting game mode. However, most servers on bedrock edition do not feature this game mode, and UHC maps just aren’t the same!

UHC function addon is an add-on that turns your game into an exciting game of UHC! It is only 570kb, but it features anything you would need in a UHC game!

Set up and start the game

If you are new to this game mode, you can check out About UHC!

Ultra Hardcore is a custom game mode where the goal is to defeat other players in the game. Normally, it can be played in team mode, but due to the restrictions of bedrock edition, you cannot team in it.

The game area is 512*512, surrounded by a border which prevents players from going out. In order to optimize the game, the border does not shrink, and only appears when you walk to them.

The PVP in this game is turned off when starting, and turn on shortly after. You can see the time until enabling PVP on the scoreboard or by the system message.

All players will be healed every 2 minutes when they are in the game. It will recover your health and hunger. The game will stop healing in the last few minutes and it will tell you when is the last one.

Once a player dies, this player will NOT be able to respawn. In the current version, the players will only be able to spectate in an overhead view in the centre of the map. The spectating feature will be added in future versions. 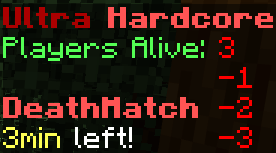 The scoreboard displays information about how minutes are left in the game, and how many players are left.

It is updated once every tick.

Deathmatch will start 20 minutes after the game has started. If the game ends before that, it will no longer start.

All players are teleported to an arena surrounded by lava. 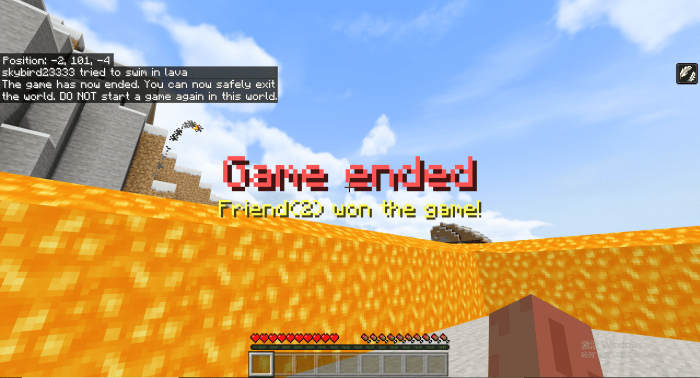 If you have won, you should get a message saying “Congrats”. Else, you get the message shown above, with the winner’s name displayed.

This pack is still n development, meaning that there are still a lot of features to be added.

The game event timer might go too fast or too slow depending on the device you are using,

There is also a help site for this pack that you can visit if you want to know more about settings.

Thanks a LOT to Floshox for helping me with the world border commands! If you want to add a bit more fun to your game, you can check out his Better Bedrock addon here!

If you have any problems while downloading the pack, or you would like to give us a suggestion, you can join our discord server to get the download or support!

-Fixed a bug which causes the scoreboard to not display.

Help menu Do "/function uhcHELP" to open the help menu.

HOTFIX: I forgot the manifest file bruh moment right there
Sorry about this stupid mistake I made

The last version adds a starter kit to the game, and this version brings you the new settings feature(still in beta).

-You can now have options before starting the game.

-You can use "/function settings/[option]/[on/off]" to turn these features on and off.

-The scoreboard should now display properly.

- Added starter kit. You are given the leather armour set on start

- Now has 2 lines of hearts, just like in Hypixel

- It kind of looks like what they have in Hypixel now

- Deathmatch time will not display until PVP time ends