The most anticipated game of the year is finally here! With this opportunity, I am releasing the Cyberpunk 2077 Addon for Minecraft Bedrock. Cyberpunk 2077 from the creators of successful Witcher Game Series - CD Project Red. This add-on implements Cyberpunk 2077 into Minecraft! Drive a car, van, shoot with weapons or talk with Johnny Silverhand, V Male/V Female, Jackie Welles or Judy Alvarez.

The Quadra V-Tech is probably the most iconic and best known car when it comes to the Cyberpunk 2077. When creating this car, I created it with amazing attention to detail. The number of parts in this model eventually stopped at astronomical 816 cubes. In total, I spent over 46 hours creating the model and the texture for this car.

Game context: V-Tech is an improved version of Quadra Turbo R introduced 8 years after it. Featuring an improved exhaust system and suspension, it quickly earned the status of cult muscle car.

Another vehicle in this addon is the Van. It is intended to represent a Cyberpunk vehicle called the VILLEFORT COLUMBUS V340-F FREIGHT. However, the model of this van will probably be replaced in the future by a completely accurate model.

The addon currently contains 5 entities. All of these NPCs have an accurate skin to the original characters. Some of the skins were created by MatFy with my requests and minor adjustments (Johnny Silverhand, V Male, V Female and Jackie Welles). I personally created the skin for Judy Alvarez. When the entity is spawned, it will write you a message. Otherwise, it will run around your world in an uncoordinated way. However, deeper functionality is still missing. Please note that I am in a time rush. The individual entities are shown in the figures below.

Game context: This is a character played by the famous fan-loved Keanu Reeves. In the game he is an ex-US military veteran and the lead singer of the band Samurai before the breakup in 2008. He will welcome you with a message: "Wake the f*** up, Samurai! We have a city to burn."

Game Context: V, alias for Vincent/Valerie (by gender), is the player-controlled protagonist of the Cyberpunk 2077 video game, that's why I implemented V Male and V Female.

Game context: He is one of the first V's contact points as well as the player's company during several missions. He speaks Spanish and doesn't like Scavengers. This character will later buy the Quadra V-Tech.

All of these skins are also available for download as a Cyberpunk 2077 Skin Pack (Check Downloads section). 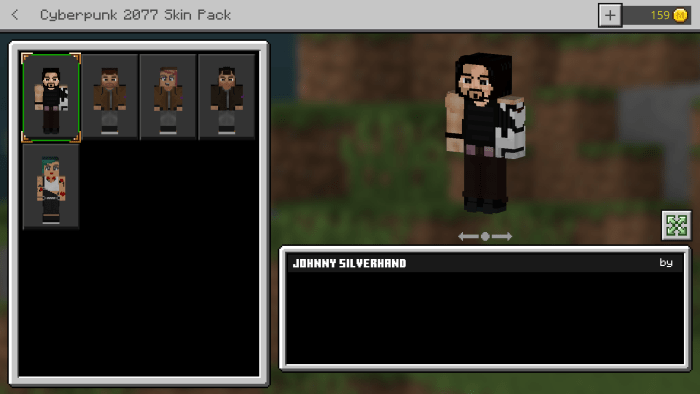 The addon also contains 2 ranged weapons. Specifically, a shotgun called BUDGET ARMS CARNAGE and a M-10AF LEXINGTON pistol. The pistol replaces the bow and the shotgun replaces the crossbow. Again, I have to note that they will be implemented as custom items with 3D models in the future.

There is always a huge amount of work at the end of the year, so I haven't been able to devote as much time to this addon as I would like to. Nevertheless, I managed to implement many essential functionalities from Cyberpunk 2077 into this Addon. What I did not have time to implement, I will correct in the future. I will try to turn all the key things from the real game into this MC "mod". All the vehicles, custom 3D weapons, more characters and deeper functionality for them are coming! I have already started working on a model for the Porsche 911 Turbo.

All registered names and trademarks mentioned in Minecraft Addon are used only for identification and are the property of their respective owners. (CD Project Red, Porsche)

All rights reserved. By downloading of this Minecraft addon you agree with these terms. No part of this work may be reproduced or transmitted without author’s permission. The person with permission must share the addon only with official download links and credits to author. Illegal distribution of this addon in apps, websites and YouTube videos and earning money from Nogard’s ownership will be punished by law. For other ways of sharing and editing the source code, you must contact the author.

Download Cyberpunk 2077 Addon.mcaddon, click on the file in a file explorer to import into Minecraft. Importing will occur automatically. Once it is finished, choose a world, go to Add-Ons section and enable resource and behavior pack for the world. When you import one of the packs, the second one should be enabled automatically, thanks to defined dependencies in manifest.json.

If you prefer to download the addon in .zip file, then you have to unzip it. Inside of this package you will find Cyberpunk 2077 RP.mcpack and Cyberpunk 2077 BP.mcpack. Import one after another of packs to Minecraft and then do the same procedure for your world as listed above.

Do the same procedure for Cyberpunk 2077 Skin Pack.mcpack. After importing, you will see the Skin Pack in the Skin Editor.

1
Sasquatch epic April 12, 2021 at 10:16 pm
So I wonder Creator. How are you going to add all the vehicles from cyberpunk
Also all the Npcs.
I give you the best of luck.

1
Gopnik kat December 15, 2020 at 7:32 am
Its make me kinda dissapointed, because the guns and melee weapon are replace vannila item and not a custom item, there is no soundon the vehicle, but still good, i hope you read this
🧡

1
Epic AdiGamerBoy July 20, 2021 at 4:19 pm
bro its supposed to be that way because cyberpunk is dissapointing too
🧡