If you wish and wanted to leash all of the default minecraft mobs then this is the add-on you’ve been waiting for, plus some other objects. “LEASH ALL MOBS” from its name is an add-on that allows you to leash and or tie all of the in-game mobs, including the ender dragon, wither boss, and other terrestrial, aerial, and marine animals and monsters and some other stuffs such as the boat, minecarts and armour stand. This add-on is for Minecraft PE 1.14 and 1.16+. 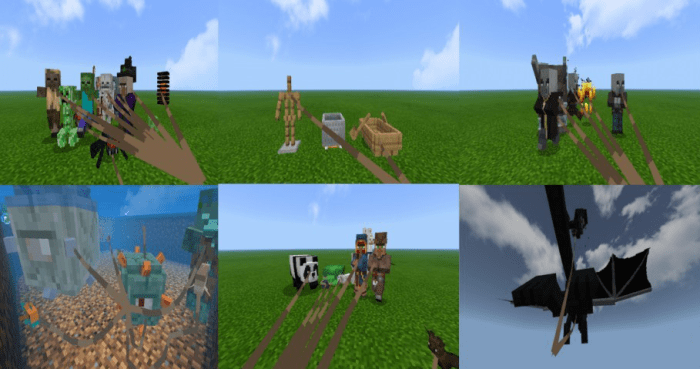 -All non-leashable mobs in the game can now be leashed.

-Tropical Fish (Type b) and Baby Zombie Pigman has a higher lead locator.

-The trade button on the Villager and Wandering Trader will appear again if they’re not been leashed and if the player is not currently holding a lead.

-Enabling the Experimental Gameplay is not required.

-For 1.16 it is not advisable to use alongside with other older add-ons.

-Wither Boss will be unleashed accidentally if it became more aggressive, the same as Enderman as it teleports and also with Phantoms as it flew above.

-Shulkers can not be pulled with lead.

-Ender Dragon can not be tied on a fence.

-The download links are broken, so it is  updated and fixed

-Reworked all the lead locator and behavior files

-just removed the link of the free download of the pirated game that is FYI IS NOT MINE, just sharing the site that i've discovered for other players who cannot afford the game.

-ill be updating this addon 1 day after this. all mobs can now be leash except the ender dragon and wither boss