It’s Christmas 1944. After a terrible accident involving Element 115, you are all that remains of your German squad. Now you have to fight for your life against your zombified allies with whatever you can find for as long as you can. There is no escape. There is no back up. Just you and a seemingly endless dark, snowy forest….

I IN NO WAY MAKE ANY MONEY/PROFIT FROM THIS PROJECT. THIS IS JUST A PASSION PROJECT/SIDE PROJECT THAT I WANTED TO MAKE FROM THE GAME FRANCHISE THAT I LOVE SO MUCH (Call Of Duty)

ALL CREDIT GOES TO Activision FOR SOUNDS

Happy Holidays! (or not depending on when you see this). For my third creation I decided to create a non- existent zombies map. Frostbite is a map that I made up from my own imagination for fun. Those that have played my previous two maps (Nacht Der Untoten and Verrückt) should feel right at home as this map uses similar systems and features, but with some improvements/upgrades. Tis’ the season of slaying!

With help from the machines and weapons that were given to your squad by the Der Riese facility, you were successfully able to capture an American outpost in the Ardennes Forest. Frostbite is set during the historic Battle of the Bulge but with a Call of Duty Zombies twist. This is a completely custom/made up zombies map similar to what you would see in World at War or Black ops 3. It includes buyable areas, buyable wall weapons and equipment, a working and movable “Mystery Box”, a working, but temporary power system, buyable perks, a “revive/respawn” system, a Lobby Room to ready up before the start of a game, a Tutorial Room to learn about the map features and gameplay, and a few small Easter Eggs that I decided to add for fun! Play alone or with friends (recommended) to combat the undead.

LOBBY ROOM: The Lobby Room is the first room you spawn in when joining/ opening the world and the central hub for the whole map. There, you can: set how many players will play (from 1-4), check out the map credits, check out how to report bugs/feedback, turn on music while you wait for friends to join, teleport to the tutorial room, and load up the map so you can play by going into the “ready up” pod with the correct number of players.

TUTORIAL ROOM: Whether you haven’t played any of my maps, are new to zombies, or just want to know how this map works, the tutorial room is the best place to get the basic rundown of how everything works. To get to it, press the button on the GOLD BLOCK in the Lobby Room. If you want to get back to the Lobby Room, press the button on the DIAMOND BLOCK once you’re ready.

POWER/GENERATORS: Just like in any COD Zombies map, turning on the power is a must, here, however, it doesn’t last forever. Without power, you won’t be able to buy perks which will make surviving even harder. Look for all four generators across the map in order to power up perk machines, but beware, they only last for 5 minutes and can only power the perks closest to their area (Ex: a generator on one side of the map cannot power a perk machine on the opposite side of the map). If you want to know which generator powers which perk machine(s),follow the grey wool carpet on the floor and see what generators and perk machines are connected to each other.

It is worth noting that the weapons are just the regular tools/weapons from Minecraft, just renamed like the ones from COD. For Example, the “P38” is an enchanted shovel. 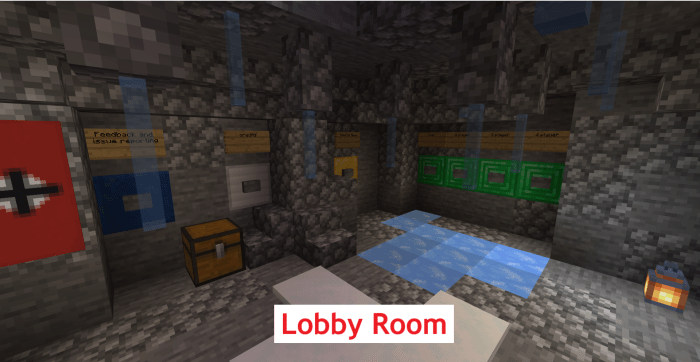 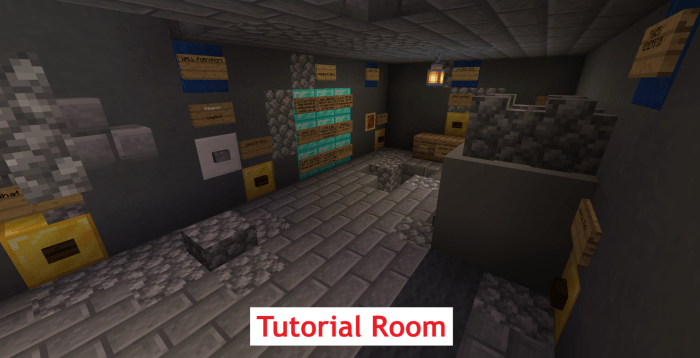 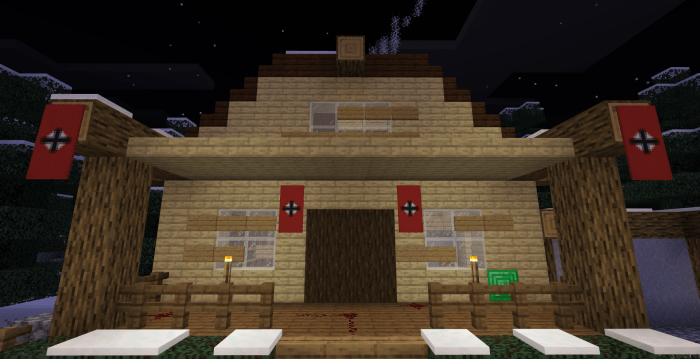 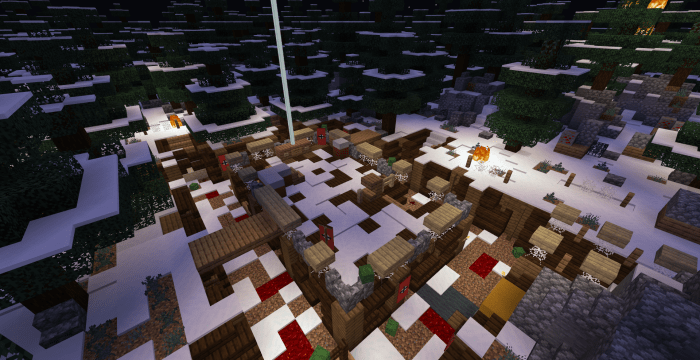 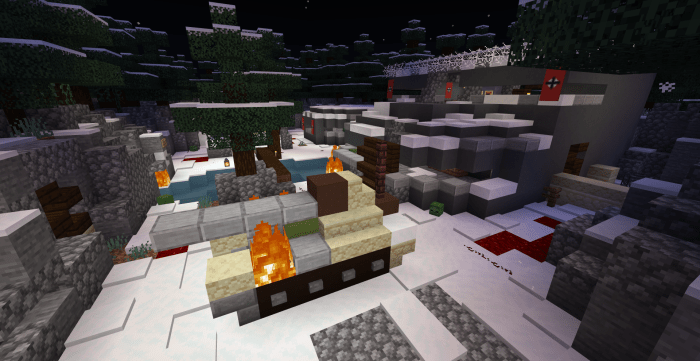 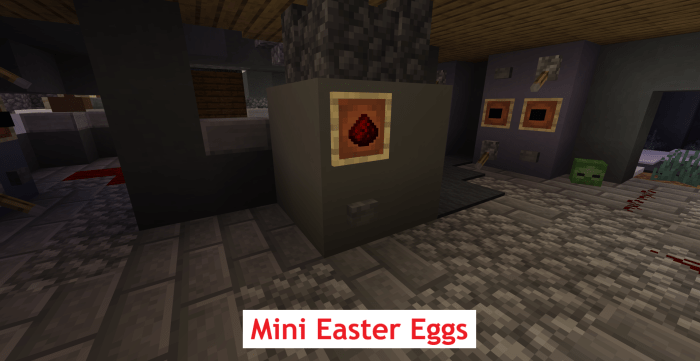 Huge shoutout and thank you to ZoMBi3 for making the featured image of this post. Check out his Youtube Channel here:

P.S: He also made his own recreation of Nacht Der Untoten on MCPEDL. It’s worth checking out!

update 4: Small changes to the maps

Universal changes (changes to all maps):

-Updated buy system to more accurately charge the person who pressed the button when purchasing something.

-Miscellaneous spelling mistakes on the maps

-Updated perk icons to look more like the originals

-Fixed issue where if you tried to buy the door connecting Crash Site with the road a second time after not having enough points the first time, it wouldn't open

-Thanks to this "Nether Update", Minecraft sounds seem to be a bit off, at least when it comes to my resource packs. There seems to be a sound limit present which prevents certain sounds from playing at the same time. Because of this, I've temporarily removed the map ambience noise in order to prevent it from interfering with other sounds. This won't effect gameplay by any means! On the bright side, it makes the resource pack size significantly smaller. On the downside, it takes away from the atmosphere of the map. Meanwhile, I'll be figuring out how to get around this, if possible, or figuring out if this is a bug that can be fixed. If anyone knows what might be going on, feel free to message me (StoicTester154) on Xbox.

Update 2: Quality of life changes across the board (as in all current maps)

-Added feature that prevents player from "buying" the area after it has already been bought (Shout out to the person who recommended it, you know who you are)

-Changed how Max Ammo/Ammo Buy works slightly. You will now no longer be able to drop arrows before buying more/ getting a Max Ammo to obtain over 64 arrows.

-There's been some issues relating to how the sound works in Minecraft, buying/activating something, and command blocks. (For example: If playing multiplayer, you would often buy something, get charged for it, but not get what you paid for). I've done my best to fix this now.

-Effects will now be cleared before the start of the match.

-Fixed issue that caused players who joined late to not hear map ambience (only applies to Windows 10 downloads).

If you are new to downloading maps. PLEASE READ-

*NOTICE*: Upon clicking on the green button, a new tab might open. This has nothing to do with the map so, if a new tab does open, simply close it and click on the GREEN download button again if you need to in order to start the download. You then must choose a file location to save the world in.

For ".zip": Once you download the ".zip" file, find it, right click it, and press "Extract all". From there, take the extracted map folder itself (Frostbite) and place it inside your "minecraftWorlds" folder. To access you Minecraft worlds for Windows 10 copy and paste this link

For ".mcworld" :simply choose a destination and double click it to automatically begin the import process to your Minecraft.

For the skin, just extract the "Free Skin" file and import it to through Minecraft.