This pack makes some changes to how the in-game music plays and adds a music player. People who enjoy listening to Minecraft's music will find this pack improves the way Minecraft music works! It's perfect for anyone who want a more pleasurable experience while playing the game.

The following features are global, meaning they affect all pack options unless stated otherwise.

There are multiple different pack options. Each one includes different features and music tracks. You can switch the pack mode by going to Global Resources in Settings and selecting the gear. 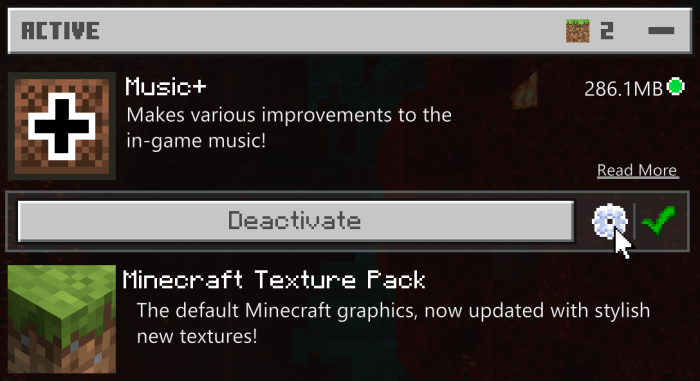 Music+ adds an in-game music player to the settings screen. This menu allows you to play any song in Minecraft with the press of a button. It works in any gamemode on any world (even without cheats enabled) as long as you can access the settings screen. 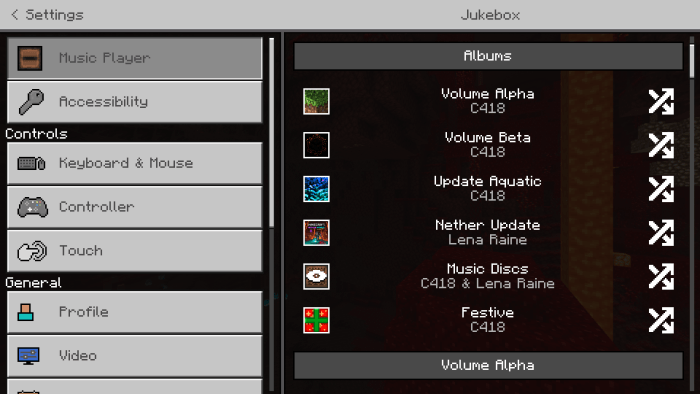 Music+ also has support for custom music added by the player with the Custom Music Container pack. Using the Custom Music pack option will replace the default game music with custom songs. Custom songs can also be played from the music player. To learn how to add custom songs to Music+, watch the tutorial below.

If you want to add custom songs, you have to download Custom Music Container in addition to Music+. The video tutorial above will walk you through adding custom songs.

Make sure to apply Custom Music Container above Music+.

November 22, 2021 at 9:46 pm
i did everything correct but the music does not play other than the default one the custom music just dosent seem to play
Log in to Reply

October 26, 2021 at 5:11 pm
Could you possibly tweak this so everyone in-game can hear you? Other than that it's a neat mod.
Log in to Reply

October 08, 2021 at 5:03 am
Will this pack ever be updated again? It plays survival music in creative or creative music in survival, like the pack options barely change anything, if they even do, I'll look closer into that pack (Any edit I do, is only for private use, dw)
Log in to Reply

November 18, 2021 at 3:20 am
He said we do not need to update it just search on yt new caves and cliff songs and add it to custom songs don (rename the mp3/other audio extensions into .ogg)
Log in to Reply

This pack will crash your game in 1.17+
Can be fixed by removing the UI folder or the creator updating the pack

September 14, 2021 at 8:38 am
Just wanna know.
If you play a music, will the other players in the world hear it or will it just be you who will hear it?
Log in to Reply

September 26, 2021 at 11:07 pm
They can have the same pack and the same custom songs if you want them to, just add this pack to your world

But if you play a song manually, they shouldn't be hearing it

(X is the number of your music)
Exemple if you want to add a cover for your second custom music the name will be "cover2.png"

August 14, 2021 at 10:26 pm
I've been having issues downloading song to the files and making them work. I've tried numerous times and still no sound. Does this custom music actually work with songs that have vocal in them? I want to have it for my channel to play songs with words and I believe I've done everything right and still nothing
Log in to Reply

September 04, 2021 at 4:16 pm
Have you converted your sound to the OGG format it's should work and do they have the good name like no "C" at the start instead of "c"

September 26, 2021 at 11:09 pm
Remove the UI folder and the pack will work fine, but it the music player menu will be gone
Log in to Reply

September 26, 2021 at 11:12 pm
1.17+ causes this pack to crash your game or just won't work properly, to stop the music you can do /stopsound and with /playsound you should be able to play/change music
Log in to Reply

July 19, 2021 at 4:53 pm
This is a really cool add-on, and I absolutely love it but I have run into a problem I need to ask, is there a custom song duration limit, orfile size limit? If so, what is it?
Log in to Reply

September 04, 2021 at 4:19 pm
They can't but you can maybe give them your custom music folder so they can have your music or put the pack in the world texture pack (just remember it's not a add-on it's a texture pack)
Log in to Reply