This includes most of the basic SCP Skins

You can use these skins for roleplay or create a youtube video.

Make sure you join the discord server if you would like me to add any new SCP Foundation Skins.

Skin Pack made by GoldenSubz

This includes most of the basic SCP Skins

Skins included in this pack:

Nine-Tailed Fox (MTF Epsilon-11) is a Mobile Task Squad composed of 9 personnel split into 3 groups. Their primary task is to handle Containment Breaches by re-containing all hostile SCP’s as well as terminating any rogue Class-D.

Mobile Task Force Sigma is charged with exploring, understanding, and eventually containing the vast otherworldly location of the Wanderers’ Library.

Janitors are Foundation personnel who keep the facility clean.

Scientists, also referred to as Doctors, are SCP Foundation personnel who research and study SCP artifacts.

The Foundation’s Medical Department is responsible for keeping employees in good health.

On-site security officers — often referred to simply as guards — at Foundation facilities are tasked with maintaining physical and information security for Foundation projects, operations, and personnel.

In 1924, the SCP Foundation formed a covert special task force, known only to the O5 Council, codenamed the “Insurgency.” The leadership of the Insurgency was comprised of members of MTF Alpha-1, the Red Right Hand, famed for their loyalty to the O5 Council and the total secrecy of their origins, identities, and operations. The Insurgency leadership was supported by research, security, and retrieval personnel, all taken from Foundation ranks.

SCP-035 referred to as the “Possessive Mask”

SCP-049 referred to as the “Plague Doctor”

A few minutes after SCP-049’s surgery, SCP-049-2 will resume vital signs and appears to reanimate. However, SCP-049-2 seems completely without higher brain functions and will wander aimlessly until it encounters another living human.

More will be added in the future!

Make sure you join the discord server if you would like me to add any new SCP Foundation Skins. 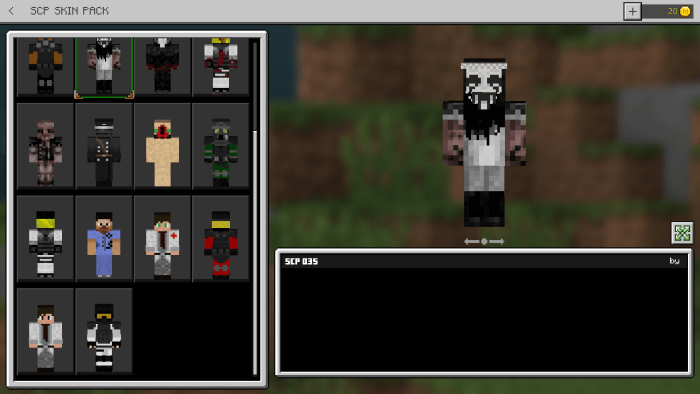 This skin pack can be used for many things

If you have any questions or any skin suggestions please join the discord server and tell me!

If you have any further questions or suggestions again leave a comment on the MCPEDL post or you can join the discord server and tell me your suggestions.

Thanks and have a wonderful day!

Once you are on the site

and look for a button that says "Skip Ad"

Should be on the top right