WW2 Battlemaps is a series of maps that will explore various battles and fronts of WW2, From the Pacific to the Beaches of Normandy till the end battle at Berlin.

In this Add-on you'll be taken to various battles and fronts of World War 2 such as the Pacific, Russia, France etc. The maps are well Designed and include great detail it's is great for both Vanilla and Modded PvP. The Weapons are Historically Accurate and are well designed to fit the intensity of the battles. Each map has a kill counter to count the Casualties of each side(The first team to lose 100 points Loses) The map is Still in the Beta version so it includes only one map osterbreek and weapons will be added in the next update along with 2 more maps.

Here's list of weapons to be added in the Next update. 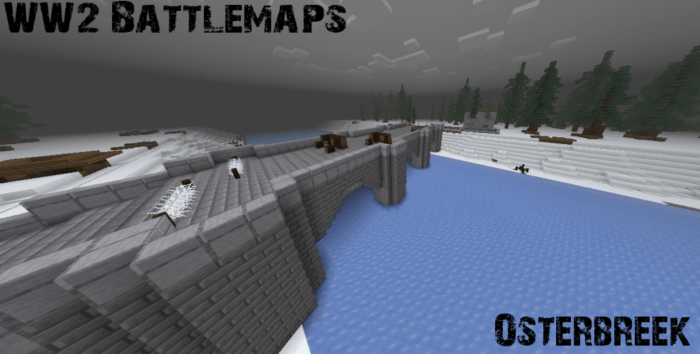 The Germans are launching an attack on a important Bridgehead in freezing conditions to secure the Advancement of thier Armoured Columns but the Soviets are Determined to stop the German Advance. The Axis spawn in a logging camp and must swiftly Advance while the Russians spawn at the Estate of Osterbreek and must Quickly mount an Defensive around the bridge.

February 04, 2021 at 11:47 pm
impressive! your WW2 build design is make me feel like i'm in war. house ruins, bridge, and all are good, cool feeling, cold war is the best time, good work, comrade!
Log in to Reply

February 04, 2021 at 11:51 pm
impressive! your WW2 build design is make me feel like i'm in war. house ruins, bridge, and all are good, cool feeling, cold war is the best time, good work, comrade!
Log in to Reply

February 06, 2021 at 6:57 pm
umm...sorry for my spam previous reply above, i accidentally clicked post comment two times, by the way will you make another map, if you don't want to update this map, why did you not make a new map, the war is on plains/jungle biome but still build house/village there for next, i hope you decided to create new map
Log in to Reply

October 20, 2020 at 10:21 pm
I'm already doing one for Battle of Berlin
I've been working on it since early June
If u want to help me work on it you're always welcomed to

September 24, 2020 at 1:02 pm
Thank you for the Good review. Ofcourse I plan to add Iwo Jima and Various battles from the Pacific front
Log in to Reply

September 23, 2020 at 6:43 pm
Download doesn’t work can you share me a media fire download please I would love to play this and it looks great. Keep going can’t wait to see more!
Log in to Reply

September 24, 2020 at 12:47 am
Sorry for inconvenience I'll look into it. I'll add media Fire links too in the next update. On that time you could Downloading it again
Log in to Reply
Report Comment
Login Sign Up Submission